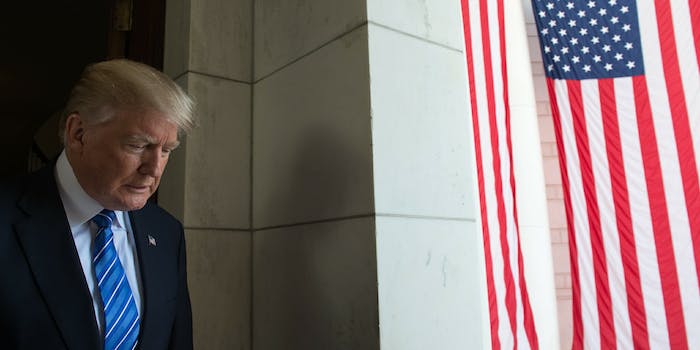 Trump expected to withdraw from landmark Paris Climate Accord

A decision to withdraw from the Paris Agreement could put the international pact on thin ice.

President Donald Trump is expected to pull the United States out of the landmark Paris Climate Accord, according to multiple reports, a move that potentially threatens the future of the Earth itself.

Trump’s alleged decision, first reported by Axios and corroborated by Politico and CNN, puts the U.S. at odds with 195 other nations that joined the climate pact and risks weakening America’s ability to negotiate climate-related issues on the international stage.

The Paris Climate Accord (aka Paris Agreement or Paris Accord), enacted Nov. 4, 2016 under the United Nations Framework Convention on Climate Change, aims to keep Earth’s temperature below 1.5ºC above pre-industrial levels, invest $100 billion a year to deal with the effects of climate change, and lower greenhouse gas emissions. The vast majority of climate scientists agree the Earth is warming due to an increase in greenhouse gases.

Trump has questioned whether climate change is a “hoax” created by the Chinese government. On Tuesday, White House Press Secretary Sean Spicer did not answer whether the president believes human activity contributes to climate change.

This very expensive GLOBAL WARMING bullshit has got to stop. Our planet is freezing, record low temps,and our GW scientists are stuck in ice

The Paris Agreement debate reportedly created a rift in the White House. Chief strategist Steve Bannon and Environmental Protection Agency Secretary Scott Pruitt led the withdraw camp, arguing that Trump leave the accord on the grounds that it would negatively affect the U.S. economy and the president’s energy policies. The push to remain in the agreement included efforts from Ivanka Trump, the president’s daughter, and Secretary of State Rex Tillerson, who argued that leaving the Paris Agreement severely weakened the U.S. position on environmental and energy issues. Rick Perry, Trump’s secretary of energy, has also reportedly argued against leaving the accord.

A full withdrawal from the Paris Accord could take as long as three years, Axios reported, unless the U.S. exited the U.N. treaty itself, which would likely be seen as a drastic move by the international community.

Soon after reports about Trump’s alleged decision were, the president tweeted that he would announce his decision within days.

I will be announcing my decision on the Paris Accord over the next few days. MAKE AMERICA GREAT AGAIN!

If Trump does decide to pull the U.S. out of the Paris Agreement, the entire pact could crumble and open the door to high-polluting nations like China and India to forego efforts to stall or reverse the adverse effects of climate change.