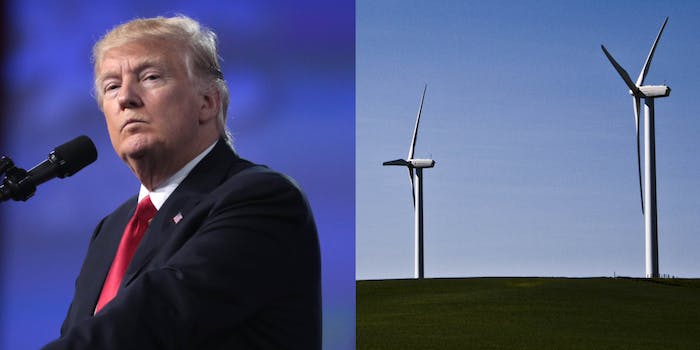 Trump said if he loses to a Democrat because of the Green New Deal, he 'deserves to lose.'

There is no evidence to support the claim that noise from windmills causes cancer, as the Atlantic pointed out in 2017, but Trump’s assertion is just the latest in his long-standing hatred of them.

“Hillary wanted to put up wind, wind. If you have a windmill anywhere near your house, congratulations, your house just went down 75 percent in value,” he told those in attendance.  “And they say the noise causes cancer… and of course it’s like a graveyard for birds.”

Here's video of Trump talking about wind mills at the NRCC dinner tonight: "They say the noise causes cancer.” pic.twitter.com/tpsmZI8k7n

The president has fixated on windmills as he continues to bash the Green New Deal. Last week, Trump incorrectly claimed that if the wind wasn’t blowing, people would be without electricity.

“The Green New Deal, done by a young bartender, 29 years old,” Trump said. “A young bartender, wonderful young woman. The Green New Deal. You know but, it’s crazy. The first time I heard it I said ‘that’s the craziest thing.’ You have senators that are professionals, that you guys know, that have been there for a long time—white hair, everything perfect. And they are standing behind her, and they’re shaking, they’re petrified of her. ‘We support the Green New Deal.'”

“It’s the craziest thing. They believe it. And we will have to do something, but don’t it too early please–don’t kill it–because we want to be able to run against it. If they beat me with the Green New Deal, I deserve to lose. It’s true.”