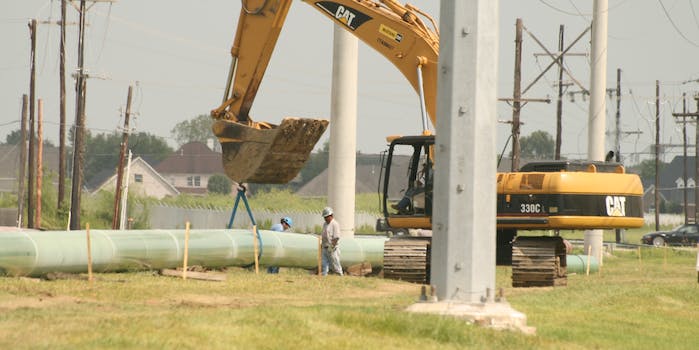 Both projects are anticipated to create less than 100 permanent jobs—combined.

On Monday, White House press secretary Sean Spicer told reporters that the president supported construction of both the Keystone and Dakota Access pipelines, touting them as a means of generating new jobs and economic growth. Spicer noted that Trump had prioritized pipeline construction during his campaign: “That’s one of those where I think that the energy sector and our natural resources are an area where I think the president is very, very keen on making sure that we maximize our use of natural resources to America’s benefit.”

The Keystone Pipeline, owned by TransCanada—as its name implies, it’s not an American corporation—and the Dakota Access Pipeline, run by the Texas-based Energy Transfer Partners, will undoubtedly create new jobs.

In fact, as many as 55 people might find themselves fully employed once construction on both projects is completed, according to earlier assessments.

Back in January 2015, Sen. John Barrasso, Republican of Wyoming, claimed the Keystone project would create “42,000 new jobs” in the United States, relying on a State Department report from the previous year. Barrasso’s remarks, however, were extremely misleading.

The State Department’s figure does not actually denote “42,000” newly employed Americans, as the Washington Post has reported. In reality, the project is expected to generate several thousand temporary positions, primarily in construction.

Most of those positions will be filled by highly-skilled contractors—welders, mechanics, electricians, etc.—which means a majority will be coming from other concluded projects, and they will hop to the next project as soon as the pipeline is done. Their temporary work on the pipeline will have little or no effect on the nation’s unemployment overall. Due to their specialized fields, most workers will be brought in from outside of Montana, South Dakota, and Nebraska, where most of the construction will take place.

Obviously, the companies manufacturing materials and equipment for the pipeline and will benefit greatly, as will their employees; but these are not “new jobs” either. The State Department’s “42,000” figure also included jobs in “arts, entertainment, and recreation services”—presumably, the pipeline workers activities will not be limited to working and sleeping. They will require food and other amenities, which will ostensibly offer a temporarily boost to local businesses and other contractors. This will all but vanish, however, once construction is complete.

In total, the project is estimated to generate 10,400 temporary construction jobs.

This is, of course, the nature of the construction business—projects come and go. Once completed, the workers will move on to the next job. But that only serves to underscore the dubiousness of the White House’s “job creation” claim. The point of building an oil pipeline, in fact, is to cut costs, increase profit margins, and otherwise benefit from its automation.

In terms of employment, there are many similarities between the Keystone and Dakota Access pipelines. For example, upon completion, the Dakota Access Pipeline is expected to create only a handful of permanent jobs: Between 15 and 20 people will be needed to operate the pipeline once it’s completed, according to the Des Moines Register.

The bulk of the jobs—between 2,000 and 4,000—are short-term construction jobs, albeit highly skilled. The estimated average pay, according to the Register, is $57,000 per year, though the project is not anticipated to take that long.

In Iowa, a deal reportedly struck between labor unions and Energy Transfer Partners means in this case at least half of the workers in Iowa will actually be residents of the state.