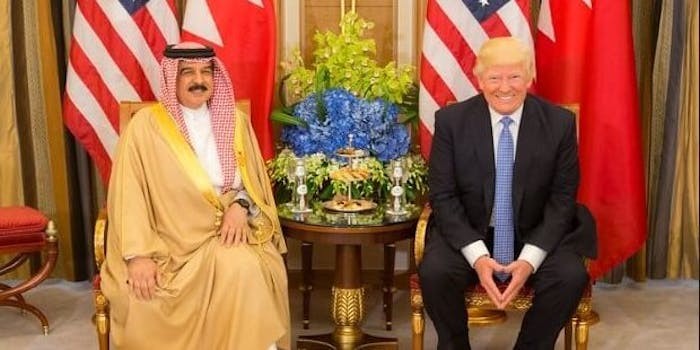 Has Trump reversed course on fighting a war for the Saudis?

Now he's all for it.

Saturday’s drone attack that crippled one of Saudi Arabia’s largest oil facilities has ratcheted up tensions between the United States and Iran, increasing the possibility of war.

The development also shined a light on how President Trump’s position on U.S. forces intervening on behalf of other nations has changed since he was a civilian.

Following the drone strike, rebel Houthi forces in neighboring war-torn Yemen claimed responsibility. The Yemeni civil war has served as a proxy conflict between Shia-ruled Iran, which backs the Houthi, and Sunni-ruled Arab nations, including Saudi Arabia, whom back the government of Yemen President Abdrabbuh Mansour Hadi. In March, the UN estimated that 65% of civilian casualties and injuries in Yemen were caused by the Saudi-led coalition’s airstrikes.

Citing the direction the drones appeared to attack from, as well as their sophistication that is believed well beyond the Houthi’s capabilities, Saudi Arabia and the Trump Administration quickly blamed Iran. Iran denies responsibility.

In a Sunday evening tweet, President Trump vowed to defend Saudi Arabia should the nation so desire, saying, “There is reason to believe that we know the culprit, are locked and loaded depending on verification, but are waiting to hear from the Kingdom as to who they believe was the cause of this attack, and under what terms we would proceed!”

Trump’s insinuation that he would deploy U.S. forces on behalf of the Saudis represents a significant departure from his previous stance. As is often the case with Trump, there is a tweet for that.

In 2014, Trump tweeted, “Saudi Arabia should fight their own wars, which they won’t, or pay us an absolute fortune to protect them and their great wealth-$ trillion!”

Saudi Arabia should fight their own wars, which they won't, or pay us an absolute fortune to protect them and their great wealth-$ trillion!

Trump has been intensely critical of U.S. allies that take advantage of its protection without paying a fair share. In January, he was reportedly considering withdrawing from NATO on this basis.

Now, it seems, he is willing to use the U.S. military to attack Iran at the Saudis’ behest. Of course, the drone strike on the Saudis may simply provide the justification he desires to take military action against Iran. Trump has reserved some of his most scathing criticisms, and punishing sanctions, for Iran, and withdrew the U.S. from the multi-nation non-nuclear proliferation treaty with the country shortly after becoming president.

It is worth noting that in 2012, Trump warned that Obama may start a war with Iran to bolster his chances of reelection.

While some stated support for an attack, others voiced opposition.

“Saudi Arabia is waging a terrible war in Yemen, which we are supplying despite a clear rebuke by Congress, and Yemeni forces attacked them. If they want to stop attacks on themselves, they should try ending their war in Yemen, not dragging US into an insane war against Iran,” economist David Rothschild tweeted. Presidential candidate Beto O’Rourke tweeted, “As President I will not go to war for Saudi Arabia, nor will I let Saudi Arabia dictate our foreign policy.”

For those asking, I'm not on expert on Yemen, so will refrain from comment. That tragic war seems very complex to me. But one thing I do know– we need our representatives in the US Congress to interrogate seriously any Trump call to go to war with Iran to defend Saudi Arabia.

The potential of a U.S. attack on Iran has solicited at least some bipartisan support, however. This morning, Sen. Chris Coons (D-Del.) told Fox News that, if the intelligence supports Iran being responsible for the drone strike, the U.S. should get involved.

just two dudes hanging out, gassing up another american war in the middle east (maybe!) pic.twitter.com/EaDkwJk2Hf

“This may well be the thing that calls for military action against Iran,” Coons said.

Host Brian Kilmeade responded enthusiastically to the prospect of a bipartisan-backed war. “I think it would be great to know that Republicans and Democrats would be behind that action if it should take place.”

This morning on Twitter, Trump again insinuated that Iran was responsible for the attack on Saudi Arabia.