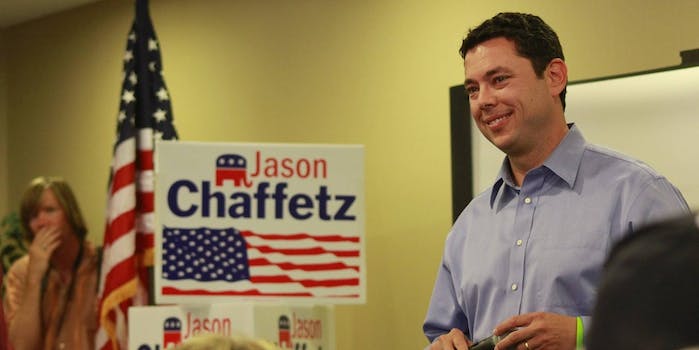 Donald Trump still believes he lost the popular vote because of fraud.

The Republican Congress just pushed back against President Donald Trump.

Rep. Jason Chaffetz (R-Utah), the chairman of the House oversight committee, isn’t going to be the one to investigate.

Chaffetz added: “The oversight committee is not planning to do anything with it. If the President sees that, he’s got 100,000 he can task with doing that.”

Although there’s been no credible evidence to suggest the kind of widespread voter fraud Trump is speaking about, he tweeted Friday morning that he still wants an investigation.

Look forward to seeing final results of VoteStand. Gregg Phillips and crew say at least 3,000,000 votes were illegal. We must do better!

Who’s Gregg Phillips, you might be wondering? He’s been cited by the far-right Breitbart News as an “election integrity researcher” and has said that millions of illegal immigrants voted.

So far, Phillips hasn’t provided any evidence to back up his claims. But he told the Daily Beast this week that he might release the names of those who voted illegally.

When asked this week what evidence Trump has seen to allege such widespread voter fraud, Press Secretary Sean Spicer didn’t answer. Instead, he said, “As I said, I believe the president has believed that for awhile based on studies and information he has.”

It’s been revealed in the past few days that Steve Bannon, Trump’s senior adviser and the former CEO of Breitbart; Jared Kushner, Trump’s son-in-law; and Spicer are all registered to vote in multiple states.