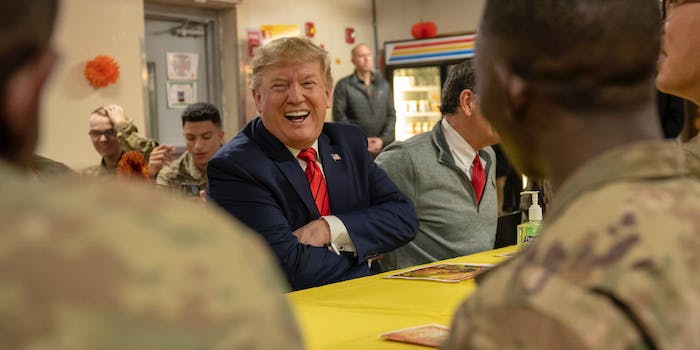 Today, the House of Representatives officially unveiled two articles of impeachment against President Donald Trump. One is for abusing the power of his office, the other for obstruction of justice, centering on the president’s actions in withholding military aid to Ukraine and demanding an investigation into Joe Biden.

It marks only the fourth time Congress has presented articles of impeachment against a sitting president.

Republicans have been fighting the push against Trump with a series of defenses that have defied credulity as the process has continued—from hammering about nude photos of Trump to pushing theories about Ukraine hacking the DNC. They also have one constant undercurrent: They seem to keep referencing bits from the Simpsons.

At the first round of hearings, because Trump eventually granted military aid to Ukraine after demanding an investigation into Biden and his son, Hunter, they said he couldn’t be charged with a crime because it wasn’t successful. What even is, they wondered, attempted extortion?

Now, Trump has tried the old “Boo-urns” defense. In a tweet, Trump said that he wasn’t not asking Ukraine’s president to do “us” a favor, but the “USA.”

Read the Transcripts! “us” is a reference to USA, not me!

Trump was likely referring to the “do us a favor” line in the transcript, where he asked Ukraine’s president to investigate the persistent conspiracy that the DNC server (a virtual object) was residing somewhere in Ukraine. It’s one Republicans have brought up again and again in the hearings.

He definitely was not literally saying “U.S.,” but if he meant do “America” a favor, it is a highly partisan favor to look into something with no basis in reality, as no U.S. intelligence agency has said anything about Ukraine’s involvement in 2016.

Not many people bought Trump’s newest “I was saying U.S.A.” line of defense

Hey Donnie
That's a new one ! Nice try but no cigar! https://t.co/i3EdyOOly0

Only took you three months to come up with that one, dumb ass. https://t.co/klZlOjOo8z

The House Judiciary Committee will vote on the articles of impeachment on Thursday.