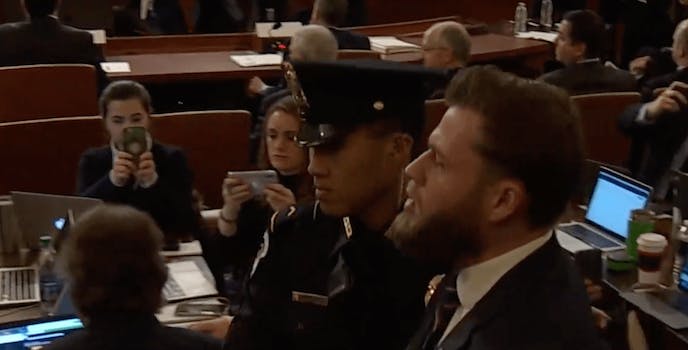 The House Judiciary Committee held another impeachment hearing on Monday to question the two lawyers from the House Intelligence Committee who led the initial hearings. The good folks at the pro-Trump, conspiratorial outlet InfoWars are trying to get a word in.

Correspondent Owen Shroyer hollered from the galley about the hearing as it began before getting forcibly removed.

“Americans are sick of your impeachment scam!” Shroyer yelled among other comments as he was escorted out. “Trump is innocent!”

"Americans are sick of your impeachment scam! Trump is innocent!" — House Judiciary's impeachment hearing is immediately interrupted by a pro-Trump protester. pic.twitter.com/bbcguyKLFF

Shroyer parroted the popular Republican talking point that impeachment investigations are attempting to overturn the results of the election and called the head of the committee, Rep. Jerry Nadler (D-N.Y.), treasonous.

Although it’s not clear if he was actually arrested (typically Capitol Police will issue fines for disruptions), people on Twitter cheered that Shroyer for “getting arrested” for standing up to impeachment.

Only conservatives get arrested for exercising their first amendment #FreeOwenShroyer https://t.co/8kcgyeDfmx

InfoWars published an interview with Shroyer an hour after he had supposedly been “arrested and jailed for free speech.” Shroyer called for Democrats on the committee to be arrested and argued it’s really officials who are “disrupting Congress.”