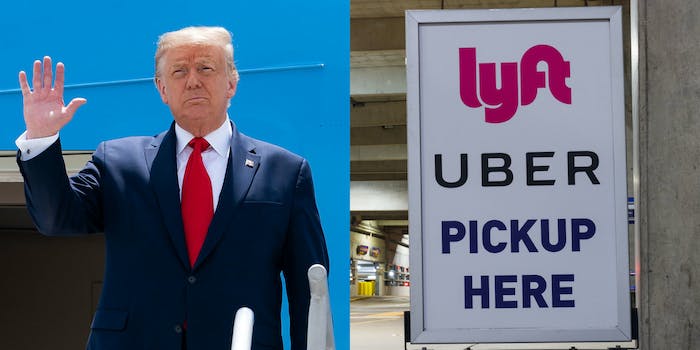 The law would require the companies to classify their workers as employees.

Earlier this month, a San Francisco Superior Court Judge ruled that Uber and Lyft must classify its workers as employees and not independent contractors under a California law passed earlier this year requiring gig workers to get benefits from companies.

Uber and Lyft had spent millions of dollars fighting the law, known as AB5. On Thursday, the two companies were granted a delay on the injunction that would have forced them to begin reclassifying workers. Both companies said they intended to suspend service in California prior to the delay.

However, Trump’s campaign is using the saga to attack their 2020 presidential rivals.

On Thursday, the campaign released a statement highlighting that both Biden and Harris have expressed support for California’s law.

“Lyft and Uber drivers’ livelihoods are being threatened thanks to Biden and Harris’s support for a law demanded by liberal special interests who want to take away workers’ opportunity to make their own schedules and participate in a free and open gig economy,” Tim Murtaugh, Trump’s campaign communications director said in a statement.

Harris announced her support for the bill in 2019 during her presidential campaign and Biden has explicitly called on California voters to reject a ballot initiative this year that would exempt Uber and Lyft from the law.

“Last year California passed #AB5, affording gig workers protections and benefits like a minimum wage and overtime pay,” Biden tweeted in May. “Now, gig economy giants are trying to gut the law and exempt their workers. It’s unacceptable. I urge Californians to vote no on the initiative this November.”