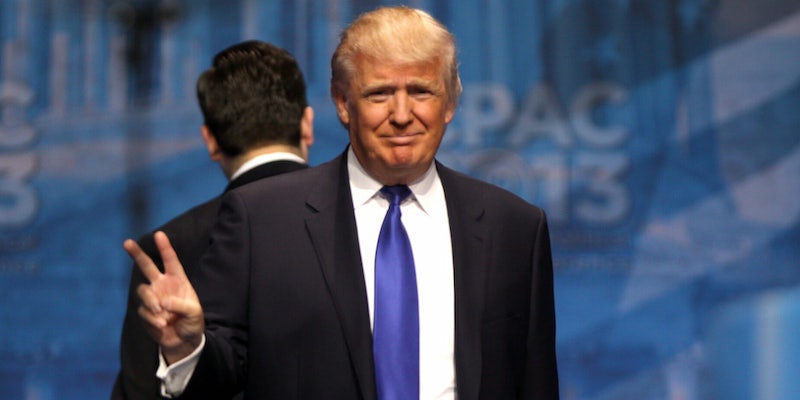 Does he really believe this?

Yesterday afternoon, during one of his classic retweeting benders—which has gotten him in plenty of trouble recently—President Donald Trump retweeted Rev. Jerry Falwell Jr., who called last week the president’s best week ever.

After the best week ever for @realDonaldTrump – no obstruction, no collusion, NYT admits @BarackObama did spy on his campaign, & the economy is soaring. I now support reparations-Trump should have 2 yrs added to his 1st term as pay back for time stolen by this corrupt failed coup

“I now support reparations-Trump should have 2 yrs added to his 1st term as pay back for time stolen by this corrupt failed coup,” Falwell wrote.

While Trump retweeting it doesn’t endorse the idea that his term should be extended—and there are varieties of safeguards in place to prevent a president from refusing to leave office—that tweet helped create an online panic over the weekend.

POTUS just RTed this, which suggests his term should be extended by two years. https://t.co/xiM2Ubu3je

This is not a fucking joke. These fascists are dead serious. How many more signs do we need that this regime needs to be driven from power now, before it's too late. If you have not read this, read it. The future is on the line. https://t.co/UfXRHHh3S1 https://t.co/NoMQhwFQy5

The fact that the President of the United States retweeted this advocation for two years to be added onto his first term, should not be taken lightly.

A peaceful transition of power is at stake. https://t.co/ZC6JQ26Ue6

The only way he leaves the WH is in handcuffs. There will be no peaceful transition of power. #ImpeachmentHearingsNow https://t.co/FmlqRmkzSL

Trump will not go willingly when he's supposed to leave the WH. There will not be a peaceful transition of power. He's been conditioning us little by little for this reality. Who's in charge of physically removing a former Prez who won't leave the WH? Seriously, does anyone know? https://t.co/aj5Bi6y7PM

The retweet, though, comes on the heels of other speculation/panic over Trump’s departure from the Oval Office. In his congressional testimony, the president’s former lawyer, Michael Cohen, said he didn’t believe Trump would leave when his term was up.

And in a recent interview, House Speaker Rep. Nancy Pelosi (D-Calif). said she thought Democrats needed to win by a resounding margin to prevent Trump from contesting the results.

Trump himself added to the fervor this morning when he tweeted that Democrats couldn’t win an election “fairly.”

“Democrat Texas Congressman Al Green says impeachment is the only thing that can prevent President Trump from re-election in 2020.” @OANN In other words, Dems can’t win the election fairly. You can’t impeach a president for creating the best economy in our country’s history…..

However, much like the unfounded panic that Trump wouldn’t accept the results of the 2018 midterms, he would have to completely toss out the Constitution and seize power in a total coup.

It’s possible, but it was probably just a tweet he found funny and not indicative of a real concern.

(But feel free to bookmark this to laugh at me when I’m wrong.)