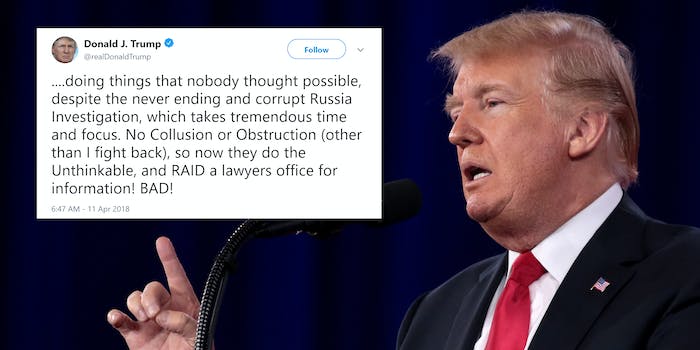 Wednesday morning, in one of his patented everyone-thinks-its-a-bad-idea-but-I’ll-show-them tweetstorms (a genre in which no one can deny President Donald Trump is peerless in), the president kind of casually admitted to possibly committing a crime.

So much Fake News about what is going on in the White House. Very calm and calculated with a big focus on open and fair trade with China, the coming North Korea meeting and, of course, the vicious gas attack in Syria. Feels great to have Bolton & Larry K on board. I (we) are

….doing things that nobody thought possible, despite the never ending and corrupt Russia Investigation, which takes tremendous time and focus. No Collusion or Obstruction (other than I fight back), so now they do the Unthinkable, and RAID a lawyers office for information! BAD!

Naturally, the internet thought this was a tacit admission guilt.

So according to President Trump, there was no "Obstruction (other than I fight back)" against the Russia investigation. What does he think obstruction of justice is? He knows that's a crime, right? https://t.co/TjksAauvZA

By saying "I fight back" in the context of "obstruction," Trump just confirmed that *actions* on his part that constitute potential obstruction have been deliberately intended as a response to the Russia probe. https://t.co/nMnYmnulk5

But then again, maybe he’s just seeing many moves ahead.

David Covucci is the senior politics and technology editor at the Daily Dot, covering the nexus between Washington and Silicon Valley. His work has appeared in Vice, the Huffington Post, Jezebel, Gothamist, and other publications. He is particularly interested in hearing any tips you have. Reach out at [email protected]dot.com.