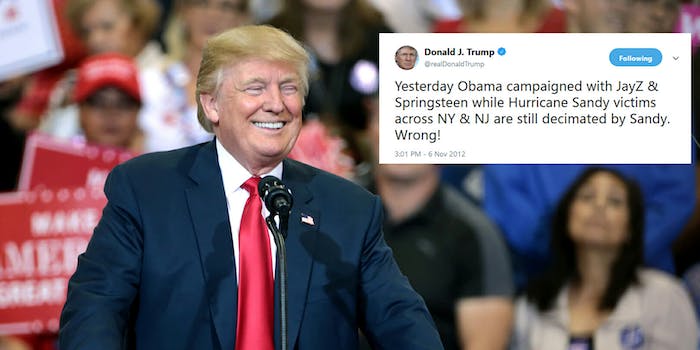 President Donald Trump once criticized former President Barack Obama for campaigning in the aftermath of Hurricane Sandy devastating the Northeast.

It appears, however, that criticism wasn’t taken to hear: the president held a campaign rally in Pennsylvania on Wednesday night, just hours after Hurricane Michael made landfall in Florida.

During the rally in Erie, Pennsylvania, the president offered his “thoughts and prayers” to those affected by Hurricane Michael and added that he would travel to the areas affected “very shortly,” according to the Associated Press.

On Wednesday, as the hurricane made landfall near Mexico Beach, Fla., Trump said he “cannot disappoint” the people attending his Pennsylvania rally.

Trump’s inability to follow his own advice about not campaigning during the aftermath of a hurricane was pointed out by people online.

Almost 6 years ago, Trump blasted Obama for campaigning during Hurricane Sandy cleanup. Look at him now up in Erie while a category 3 hurricane hits Florida. https://t.co/h0pv8KRpvd

Fun reminder that in the 24 hours since Hurricane Michael made landfall in Florida yesterday, Trump:

Man there really is a tweet for everything https://t.co/yq0pIu7OPZ

Trump Today: despite the hurricane I can't disappoint my supporters and will attend a rally tonight.