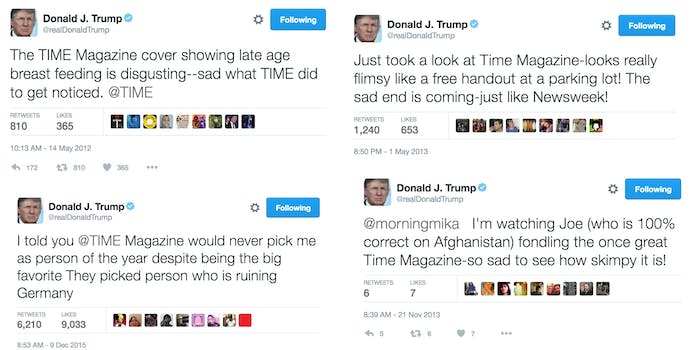 Trump is Time's 'Person of the Year'—finally.

Donald Trump is, at long last, Time magazine’s “Person of the Year.” But that doesn’t mean he’s not still sour for all those years that passed him by.

Speaking with the Today show on Wednesday morning, Trump balked at Time editors’ decision to dub him the “President of the Divided States of America” on the cover of its Person of the Year issue.

“I think putting ‘divided’ is snarky,” Trump said. “I didn’t do anything to divide.”

Trump is famously combative with the media, whom he’s branded as a liars and hacks. But he has particular beef with Time, which has featured Trump on its cover at least 12 times—not always flatteringly—but never before given him the honor of Person of the Year. And like everything else with Trump, there are tweets to prove it.

Some of Trump’s tweeted gripes have come in the form of retweets, but others are from the man himself. And he doesn’t always view Time as bad—he has worked with the magazine a dozen times in the past, after all. Here is a complete timeline of Trump’s complex, fraught relationship with Time.

So biased: @TIME made 'The Protester' as the person of the year. @TIME celebrates OWS but vilified the Tea Party last year.

The TIME Magazine cover showing late age breast feeding is disgusting–sad what TIME did to get noticed. @TIME

As I anticipated, Justice Roberts made the cover of Time Magazine etc. The liberal media now loves him– he should be ashamed.

Despite the upcoming election, the cover of paper-thin Time Magazine looks like an ad for the movie Lincoln–sad!

Just took a look at Time Magazine-looks really flimsy like a free handout at a parking lot! The sad end is coming-just like Newsweek!

"@PatrickMendezNV: They're going to make you their @TIME person of the year in attempt to silence you. They are not smart enough to do that

Time magazine should name David Pecker of American Media to be its top guy…but they are not smart enough to do that!

.@TIME Magazine should definitely pick David Pecker to run things over there – he'd make it exciting and win awards!

@morningmika I'm watching Joe (who is 100% correct on Afghanistan) fondling the once great Time Magazine-so sad to see how skimpy it is!

"@PatrickMendezNV: We had a great exchange on Twitter re: you being snubbed for @TIME person of the year,@realDonaldTrump. Time=no guts!

"@fackinpeter: @realDonaldTrump I think you should be Time's person of the year"

"@fackinpeter: @realDonaldTrump I think Time Magazine should pick you as Person of the Year. We need you in 2016"

"@fackinpeter: I don't care what @Time says, @realDonaldTrump is my person of the year"

"@PatrickMendezNV: We had a great exchange on Twitter re: you being snubbed for @TIME person of the year,@realDonaldTrump. Time=no guts!

On the cover of @TIME Magazine—a great honor! pic.twitter.com/zlEHp49oPs

Had a special visitor in my office yesterday for @TIME photo shoot. pic.twitter.com/GoloYLeRZz

Thank you @oreillyfactor for your wonderful editorial as to why I should have been @TIME Magazine's Person of the Year. You should run Time!

(1/2) Time Magazine has me on the cover this week. David Von Drehle has written one of the best stories I have ever had.

Remember, get TIME magazine! I am on the cover. Take it out in 4 years and read it again! Just watch…