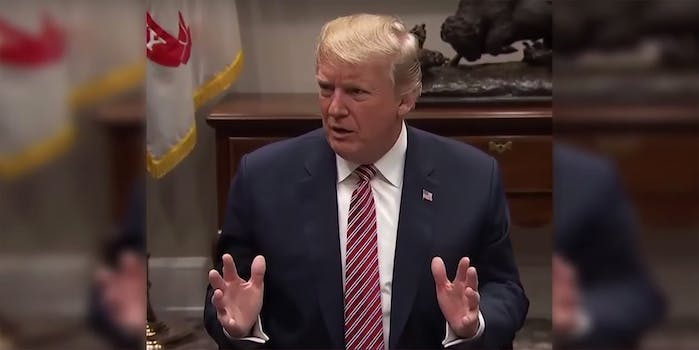 He's doubling down on his proposal to arm teachers.

President Donald Trump has doubled down on his suggestion that teachers carry concealed weapons in schools, saying they should receive bonuses for doing so, Business Insider reported Thursday.

During a meeting on school safety, Trump reportedly suggested “a little bit of a bonus” for teachers and officials who “understand weaponry” and carry guns in schools.

Trump had proposed Wednesday during a White House listening session with shooting survivors that arming teachers could curb gun violence at schools.

“If you had a teacher who is adept at firearms it could very well end the attack very quickly,” Trump said in the session with Florida students who survived the Parkland massacre that left 17 dead last week.

Trump also tweeted that if “a school has a large number of very weapons talented teachers,” a shooter wouldn’t attempt an attack.

….If a potential “sicko shooter” knows that a school has a large number of very weapons talented teachers (and others) who will be instantly shooting, the sicko will NEVER attack that school. Cowards won’t go there…problem solved. Must be offensive, defense alone won’t work!

“These people are cowards,” Trump said during Thursday’s meeting. “They’re not going to walk into a school if 20 percent of the teachers have guns. It may be 10 percent, it may be 40 percent.”

He also said schools should have high-level security—like banks.

“If you harden the sites you’re not going to have this problem,” Trump said. “When you say this school is gun free… That’s what they want to hear.”

Some on Twitter are arguing that Trump’s comments about arming teachers were more about asking inexperienced teachers to go through training than employing teachers with military or law enforcement experience to carry.

Also, pretty sure 20% of teachers are not ex-military or police. Arming teachers is not the answer. Removing the assault rifles that have been used in almost every single mass shooting is. Period. It’s not the late 1700’s. We have an Army. They are well regulated.

The Washington Post estimated there are about 3.6 million teachers in the United States currently, and “the cheapest training” to arm one-fifth of them would come out to $251 million. The most expansive training and equipping teachers—who on average make $55,000 per year—with a full-price firearm would cost $1 billion, according to the Post.

But the cost of arming teachers isn’t just monetary, some Twitter users said.

Teachers are angry about this. Worldwide we are already teachers, social support workers, sometimes almost parents to these kids. We don't want to be soldiers as well.

Florida Sen. Marco Rubio, a Republican, said during a CNN town hall debate event Wednesday that he did not support arming teachers.

“Imagine in the middle of this crisis,” Rubio said. “The SWAT team comes into the building, and there’s an adult with a weapon in their hands. And the SWAT team doesn’t know who is who, and we have an additional tragedy that was unnecessary.”