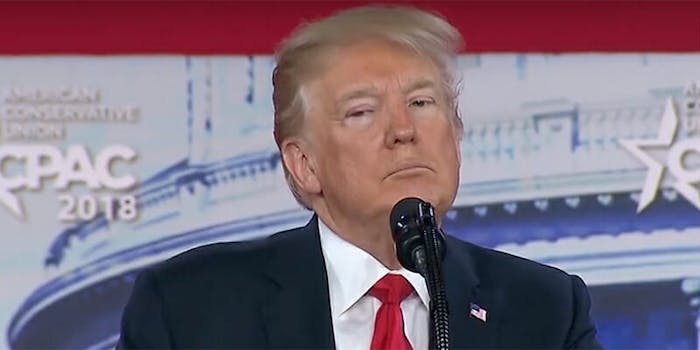 He really wants to arm teachers with concealed weapons.

President Donald Trump on Friday reiterated his suggestion of arming teachers with concealed carry weapons, saying at the Conservative Political Action Conference (CPAC) that teachers would be on board with the idea because they “love” their students.

Trump also said that a teacher carrying a concealed weapon could have stopped Nikolas Cruz, the gunman who killed 17 people at a high school in Parkland, Florida, last week.

“So this crazy man who walked in wouldn’t even know who it is that has [a concealed weapon], that’s good!” Trump said during his CPAC speech. “It’s not bad, it’s good! And a teacher would have shot the hell out of him before he knew what happened.”

In the wake of the mass shooting at Marjory Stoneman Douglas High School, Trump has repeatedly pushed his proposal to arm teachers in an effort to curb school shootings. On Thursday, he suggested bonuses for teachers who choose to carry guns.

Trump has also insisted that per his proposal, not all teachers would carry concealed weapons.

“The teachers, and the coaches, and other people in the building … the dean, the assistant dean, the principal … they can—they love their people, they wanna protect these kids,” Trump said at CPAC. “And I think we’re better with that—and this may be 10 percent or 20 percent of the population of teachers, et cetera, it’s not all of them.”

On social media, teachers have started using #ArmMeWith to show what they’d rather have instead of weapons, like classroom resources and funding.