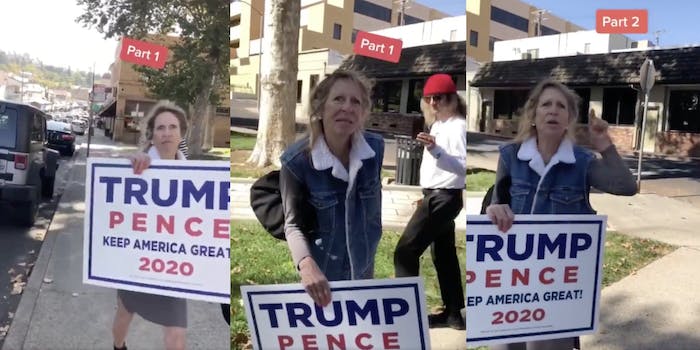 The woman accuses numerous people of supporting 'pedophilia and communism' as well.

A female supporter of President Donald Trump has gone viral after being captured on camera repeatedly using the N-word.

The video, reportedly filmed in Sonora, California, begins with the woman confronting a group of people standing on the side of the street.

The woman mocks one person for holding a sign of her own that called for “peace and love.”

The woman, who soon began her racist tirade, is seen in the video holding a Trump 2020 campaign sign that says “Trump Pence Keep America Great! 2020.”

When another person asks the woman to back away, the Trump supporter responds by repeatedly using the N-word.

The woman goes on to use the N-word several more times before accusing the demonstrators of advocating for “pedophilia and communism.”

“You want pedophilia and communism?” she says. “Vote Democrat!”

After mocking the person filming again, the woman goes back to her rant on pedophilia.

The woman also goes on to claim that she killed her own husband after the protester filming jokingly says that she loves her “energy.”

It remains unclear whether the woman is married or the status of her alleged husband.

It is also unknown if the woman, who has not been publicly identified, had the police called on her as a result of her remarks.