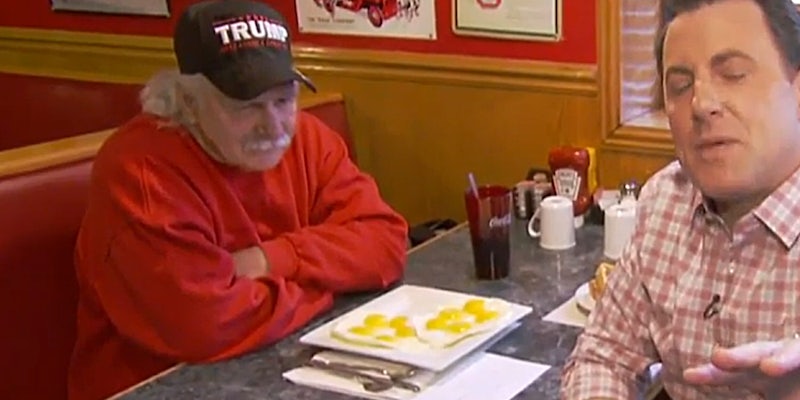 That is so many eggs.

This morning, Fox News performed its time-honored ritual of finding randos to be big meanies to the libs on camera.

This time, it parachuted into a breakfast diner in the Milwaukee, Wisconsin area to rustle up some guys with huge chips on their shoulders about free healthcare and those Democrats in Congress.

One such MAGA man caught Twitter’s attention more for the contents of his breakfast than for his railing about Democrats buying votes with their support for popular social policies.

Things got wildly amusing after the astute @IamSpilly pointed out that Grandpa MAGA was poised to consume an alarming number of eggs.

Sorry, I can’t stop laughing at the 27 goddamn eggs on his plate https://t.co/YzMJgnDdZF

From there, the jokes came rolling in. Twitter, as usual, did not disappoint.

“I’ll have ten eggs over easy with a side of fascism.”

“When asked how difficult a Trump victory in 2020 would be, he simply replied ‘over easy!’”

When asked how difficult a Trump victory in 2020 would be, he simply replied “over easy!”

Lots of folks made reference to Gaston of Beauty and the Beast, who proudly proclaimed, “When I was a lad I ate four dozen eggs.” “Gaston has aged terribly,” one quipped.

Others got creative with the memes.

Elsewhere, the sleuthing cracked open some egg-cellent details, such as the fact that this Wisconsin restaurant has a Robert E. Lee special on its menu, which, if you’re feeling peckish, comprises two biscuits with gravy, two sausages, two eggs, and hashbrowns for $10.99.

If that’s not your cup o’ cholesterol, try the Baby Beef Liver, with onions, of course, from the senior citizen menu. And sauce it all up with a side of mayonnaise for $0.49 or something called Johnny V’s red sauce (which we’re guessing is ketchup) for a buck.

Things became even more delicious from there.

Milwaukee leans into its stereotypes more than anywhere else I've been and it's fucking awesome.

Folks considering adopting a diet that includes a ten-egg breakfast with a cola may be somewhat alarmed to learn that, “Unfortunately, no studies have fed people more than three eggs per day.” That’s according to an extremely enthusiastic Healthline article that makes one wonder whether the outlet is an arm of the egg lobby. It might be worth noting that ten eggs contain roughly 750 calories, per WebMD.

But worry not, fair egg-fanatic, according to Healthline, there was at least one old guy who ate twenty-five eggs a day and was perfectly fine. Heck, he might have been on television this morning.