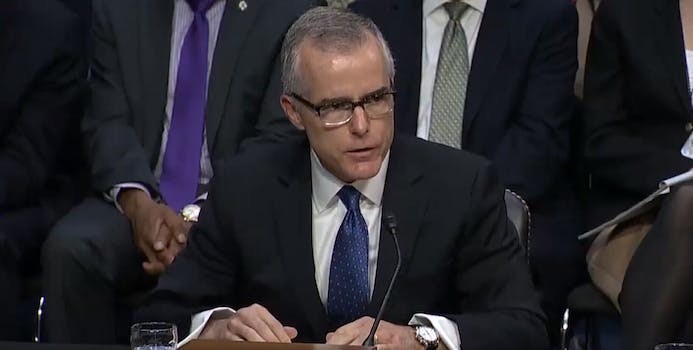 Hours after a damning New York Times report alleged that President Donald Trump made racist remarks toward immigrants from Afghanistan, Haiti, and Nigeria, the president took to Twitter to blast FBI Deputy Director Andrew McCabe for his retirement plans.

The criticisms were sparked by a Saturday story in the Washington Post, which suggested McCabe plans to retire in March after he becomes fully eligible for pension benefits. The deputy director served as James Comey’s right-hand man during the FBI’s investigation of Hillary Clinton’s private email server, as well as several other investigations that drew the ire of the president.

Now, McCabe has officially incurred the wrath of Trump’s rage-tweeting.

How can FBI Deputy Director Andrew McCabe, the man in charge, along with leakin’ James Comey, of the Phony Hillary Clinton investigation (including her 33,000 illegally deleted emails) be given $700,000 for wife’s campaign by Clinton Puppets during investigation?

Trump’s first tweet references criticisms leveled at McCabe and his wife, Jill, who received a donation of nearly $500,000 during her 2015 Virginia state senate campaign from Virginia Gov. Terry McAuliffe, a close friend of the Clinton family.

Trump also tweeted about FBI lawyer James Baker, who was reassigned from his position as the bureau’s general counsel. The Washington Post reported on Thursday that Baker “had been caught up in a strange interagency dispute that led to a leak probe and attracted the attention of senior lawmakers,” but that it “had not played a part in Baker’s reassignment.”

How Trump conveys being outside a system he now runs, by expressing surprise at news that’s been out for days and which he may have learned of from his advisers https://t.co/k8BVTKCw51

Perhaps it would behoove Trump to do some damage control regarding his alleged immigrant remarks—but if his past Twitter behavior is any indication, the president is just getting started.