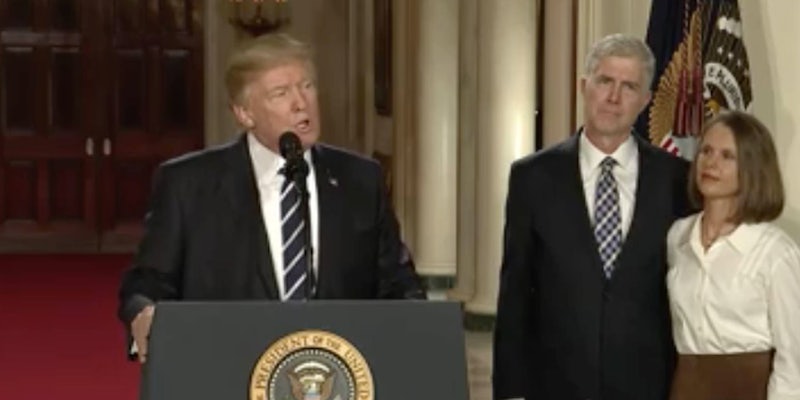 The Colorado native ruled in favor of religious exemptions to Obama's contraception mandate.

President Donald Trump‘s pick to replace the late Antonin Scalia is Judge Neil Gorsuch of the U.S. Court of Appeals for the 10th Circuit, a conservative champion who mirrors the late justice’s philosophy.

Trump on Tuesday evening announced that Gorsuch would be his nominee for the Supreme Court.

“He really is the representative of the late and great Antonin Scalia,” said Trump, who said he reviewed Gorsuch’s writings and career, and determined he was a worthy apprentice to the conservative justice’s teachings.

“A judge who likes every outcome he reaches is likely a very bad judge,” said Gorsuch.

At 49 years old, Gorsuch would be the youngest Supreme Court nominee to face confirmation hearings since Justice Clarence Thompson. Gorsuch’s mother, Anne Gorsuch Burford, was appointed by Ronald Reagan to head the Environmental Protection Agency in 1981.

The Colorado native is sure to be a favorite of religious liberty enthusiasts, and a potential foe for reproductive health and LGBT rights advocates. Gorsuch in 2013 sided with the majority in the 10th Circuit decision on Hobby Lobby v. Sebelius, arguing that corporations with religious owners cannot be required to pay for insurance coverage of contraception under Obamacare’s mandate. Gorsuch argued that requiring the owners of Hobby Lobby to provide their employees with any health insurance coverage—which under Obamacare included contraceptive coverage—was a burden on their exercise of religion.

“[N]o one before us disputes that the [regulation] compels Hobby Lobby and Mardel to underwrite payments for drugs or devices that can have the effect of destroying a fertilized human egg,” wrote Gorsuch in his concurring opinion.

Dissenting judges in the case pointed out that there are factual disputes over whether IUDs and hormonal birth control pills actually kill fertilized eggs, as many pro-life organizations claim they do.

Hobby Lobby used Citizens United as precedent to rule that corporations are entitled to exemptions from law due to the religious beliefs of their owners.

The Supreme Court’s ruling on Hobby Lobby worried LGBT activists who saw it as paving the way for corporations to cite religious beliefs for not hiring or firing an LGBT employee.

In a speech before Case Western Reserve University a few months after Scalia’s death, Gorsuch spoke about Scalia’s legacy and cited reasons that he believed Scalia’s spirit would endure. He argued that the founders intended the Supreme Court to have a “backward-looking” not “forward-looking” mentality.

“Meanwhile, the founders understood the judicial power as a very different kind of power. Not a forward-looking but a backward-looking authority. Not a way for making new rules of general applicability but a means for resolving disputes about what existing law is and how it applies to discrete cases and controversies.”

Gorsuch states that he believes judges should refrain from being legislators. Skeptics are likely to say that given Gorsuch’s solidly conservative history of opinions, his beliefs are not a reflection of his actual practices.