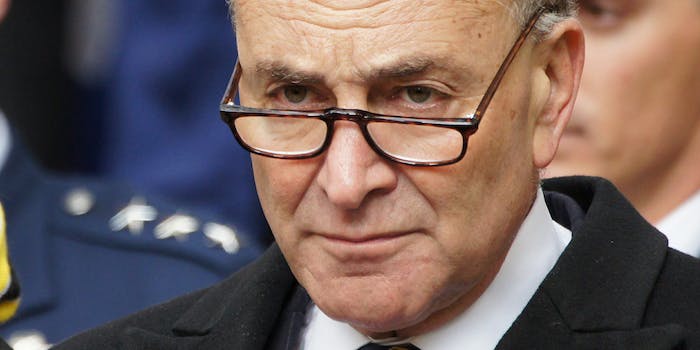 Trump tweeted early Wednesday that Schumer was responsible for allowing 29-year-old Sayfullo Saipov, the suspect in Tuesday’s deadly attack that left at least eight people dead and more than a dozen others wounded when he drove onto a bike path in lower Manhattan, for helping pass the “Diversity Visa Lottery” program.

“The terrorist came into our country through what is called the “Diversity Visa Lottery Program,” a Chuck Schumer beauty. I want merit based,” Trump wrote.

The program, run through the State Department, has been around for more than 20 years and offers a limited number of visas to people from parts of the world that have a lower number of immigrants coming into the United States. Saipov is reportedly from Uzbekistan. ABC News reported that Saipov entered the country through the program.

Schumer helped craft the program in 1990, the Washington Post reports, and it became part of a larger immigration package, The Immigration Act of 1990, that passed through Congress with bipartisan support and was signed into law by a Republican president. The law expanded the number of legal immigrants that are allowed to enter the United States each year in addition to introducing the lottery program.

To qualify for a visa, a person must have a high school education or two years in an occupation that requires training, and they are chosen through a computer-based lottery system.

Trump appears to have latched onto the Schumer angle after it was pushed by far-right media outlets and figures in the wake of Tuesday’s attack.

“He ‘won’ his visa under the Diversity Lottery program introduced by none other than @SenSchumer,” former Trump staffer Sebastian Gorka wrote on Tuesday night.

The website, which is favored by the so-called “alt-right”—a far-right group that champions nationalistic and white supremacist views—referred to the Diversity Visa Lottery program winners as “Schumer-visa winners.”

Saipov allegedly rammed into pedestrians on a bike path before exiting his car with two imitation guns before being shot in the abdomen by police. He is expected to survive.

Update: 8:13am CT, Nov. 1: Schumer responded to the president’s claims on Twitter.