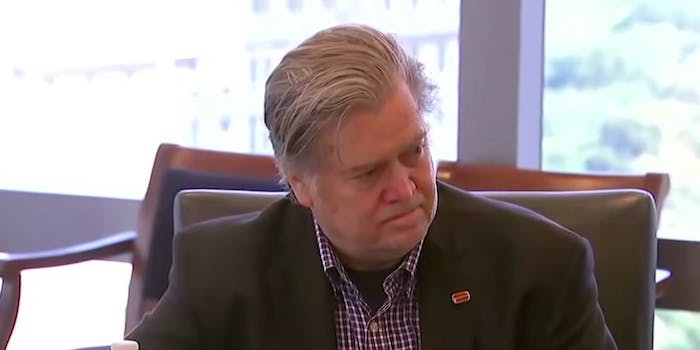 The president distances himself from his adviser amid rumors of White House infighting.

President Donald Trump took steps to distance himself from White House chief strategist and aide Steve Bannon on Tuesday by denying that their association existed prior to when Bannon joined the campaign team, despite extensive proof to the contrary.

“I like Steve, but you have to remember he was not involved in my campaign until very late,” Trump said, distancing himself from his inner circle confidante in an interview with the New York Post. “I had already beaten all the senators and all the governors, and I didn’t know Steve. I’m my own strategist.”

The extraordinary claim comes amid rumors of infighting within the White House, between Bannon and Trump’s adviser and son-in-law Jared Kushner. It directly contradicts the president’s previous claims that he knew Bannon for many years.

In an announcement made in August last year, when the president hired Bannon and Kellyanne Conway to join his campaign team, Trump said that he had known him for a long time.

“I have known Steve and Kellyanne both for many years. They are extremely capable, highly qualified people who love to win and know how to win,” Trump said in a press release. “I believe we’re adding some of the best talents in politics, with the experience and expertise needed to defeat Hillary Clinton.”

The website points to a report that says Trump first met Bannon in 2011, introduced by David Bossie of conservative think tank Citizens United, and was a regular on the his radio show. The Washington Post noted that Trump appeared on Bannon’s show no less than nine times.

In fact, a corroborative New Yorker article from March goes further as to state that Bannon and the now-president spent time strategizing about a possible campaign in Trump Tower. Bannon reportedly believed that Trump was “the one” to shake the establishment up.

Now speculation mounts that the former executive chairman of Breitbart News may soon be forced to fall on his sword in what would be a spectacular fall from grace and security. It’s said that tensions between the two have been running high, with staffers claiming that Bannon allegedly refers to Kushner as a “globalist” and a “cuck.”

Bannon, given Trump’s recent comments, may do well to remember the age-old proverb that “blood is thicker than water.”