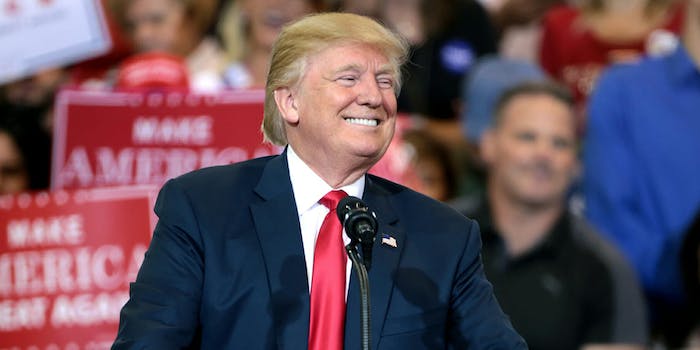 Trump says ‘everyone thinks’ he should win the Nobel Peace Prize

A lot of people have been clamoring for President Donald Trump to win the Nobel Peace Prize as peace talks between North Korea and South Korea continue and the United States prepares to meet with the northern country in the near future.

Apparently, Trump has heard those calls.

When asked if he should win the prize by a reporter on Wednesday morning, Trump replied:

Reporter: Do you deserve the Nobel Prize?

The calls for Trump to win the prize, which former President Barack Obama won, came shortly after the historic peace talks between South Korea and North Korea began late last month. Following the meeting between North Korean leader Kim Jung-un and South Korean President Moon Jae-in, several notable conservatives online said the president should be awarded the prize, with some even suggesting Obama’s should be rescinded.

Shortly after that, a group of 18 Republicans in the House of Representatives took it one step further, nominating the president “in recognition of his work to end the Korean War.”

“Since taking office, President Trump has worked tirelessly to apply maximum pressure on North Korea to end its illicit weapons program and bring peace to the region,” the letter from House Republicans read. “We can think of no one more deserving of the Committee’s recognition in 2019 than President Trump for his tireless work to bring peace to our world.”

The president is set to meet with North Korea in the near future. On Wednesday Trump said a “date & place” had been set for the summit.