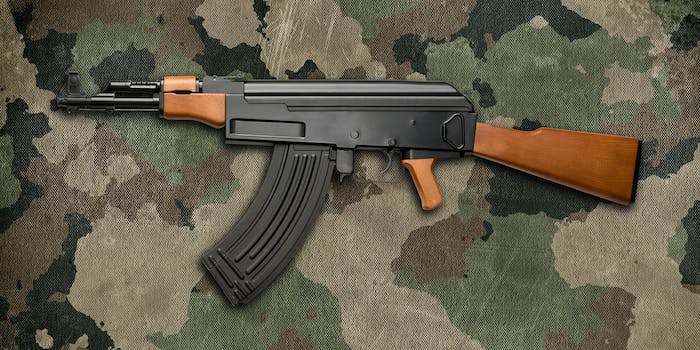 That one doesn't exist.

This morning, the New York Times released a wide-ranging interview with President Donald Trump, where they discussed his treatment of the press, trade talks with China, and Jared Kushner’s security clearance.

Trump also took time to push a right-wing talking point, about how the arrest of Roger Stone was a miscarriage of justice and the show of force by the deep state.

In his comments on Stone being taken into custody by the FBI, Trump took particular issue with the type of gun the agents used, which according to the president, is a Russian-made rifle that doesn’t exist.

That was a long time. I will say this, I’ve always liked—I like Roger, he’s a character. But I like Roger. For a team of 29 people with AK27s, or whatever they were using, to charge a house like they did at 6:00 in the morning. I think that was a very sad thing for this country.

Trump most likely meant AK-47 and was using it colloquially to reference semi-automatic rifles carried by the FBI.

Which is perfectly OK and normal, except that the gun debate is riddled with people who shoot down gun control arguments by belittling people for incorrectly saying the AR in AR-15 stands for assault rifle and not Arma-lite.

So people appreciated this little slip of the tongue by the president.

Also because, you know, of the president thinking his FBI carried Russian weapons and him being an alleged Russian asset and what have you.

Well, actually, AK-27’s are the weapon of choice for the nasty thugs of MS-15

I just listened how the FBI stormed Stones home carrying AK27's – AK27's! This shows our military genius.
1) There is no such weapon in the world.
2) AK47 is a Soviet Assault Rifle. Its the preferred weapon of our ENEMY.
3) We use an M4 which I started with the M16/M16A1/M16A2

I heard Trump say AK 27, and wondered what that was? I don’t even know guns and questioned what he was talking about. He knows more than the Generals? He knows the most about technology? 🙄 https://t.co/soZ506dUMz

What in the hell is an AK-27???? To you cult members…… this is who you worship. Allow this to sink in. pic.twitter.com/rGfefF7sfQ

It's even worse than we thought pic.twitter.com/aTqthvEdOr

— Wash your hands to The Boys Are Back In Town (@BobbyBigWheel) February 1, 2019

What Trump was most likely referring to was the Colt M4 carbine, a gun with a strong similarity to the AK-47.