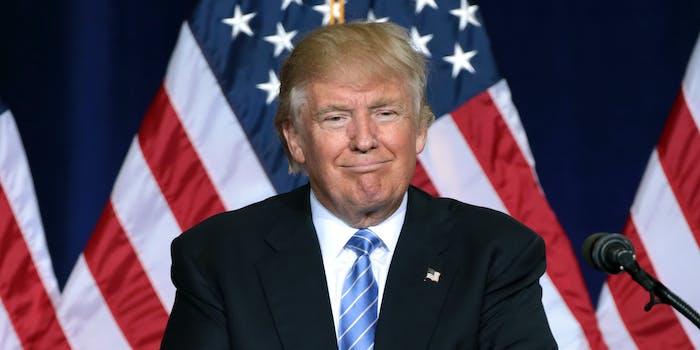 The president knows it's a long shot.

President Donald Trump reportedly still keeps in contact with a top aide who was dismissed over domestic violence accusations and even wants to bring him back, according to the New York Times.

The accusations against staff secretary Rob Porter—who was one of Trump’s closest confidantes—thrust the White House into its latest tumultuous iteration, setting into motion the departure of Hope Hicks and the removal of Jared Kushner’s security clearance.

Now, Trump, who has been portrayed as rudderless since his inner circle was shaken up, wants Porter to return, although he knows a move like that is probably not possible.

Mr. Porter also served as a de facto deputy chief of staff for policy, playing a key role on issues like tariffs, and Mr. Trump spent as much as two hours a day with him.

According to the Times, Trump’s calls to Porter have increased as more of his closest staffers have been forced to leave.

Porter’s departure came after the Daily Mail published a story in February where two of his former wives said he was violent with him.

The situation also thrust Chief of Staff John Kelly into the spotlight for how he handled the news, claiming to White House staff that he had immediately called for Porter’s dismissal when he discovered the news. It was later revealed the White House likely knew about the accusations months prior.

Porter was working on a temporary security clearance. The uproar over him being allowed access to classified material led to the White House to put a halt to people working with temporary clearances and Kushner—who had been granted similar, temporary access—losing his clearance.

Hicks, too, initially tendered her resignation when the news broke, having helped with the White House statement supporting Porter, which was widely decried. Hick and Porter had recently been revealed to be dating, which may have prompted the Porter abuse story.