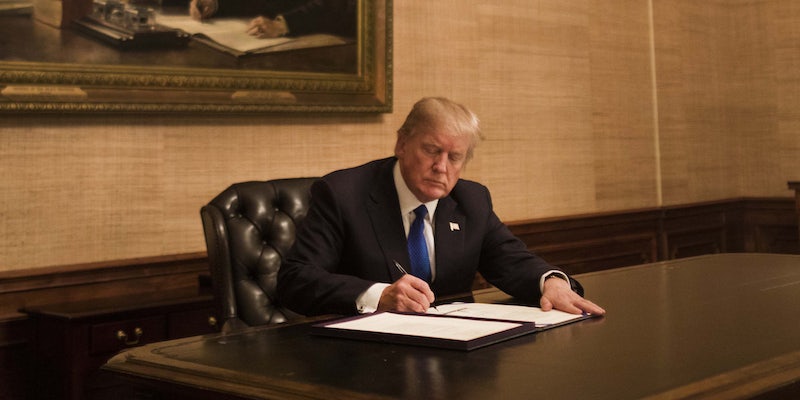 The habit could have gotten him into some legal issues.

President Donald Trump reportedly rips up papers when he’s done with them, which forces officials to put them back together with tape to avoid violating the Presidential Records Act.

Politico reports that Trump rips up papers or tosses them on the floor, which some people described as the president’s “filing system,” leaving aides in the White House with the task of cleaning up the papers to make sure he did not violate the law, which requires the preservation of memos, letters, emails, and papers.

The papers were sometimes torn into small pieces, and other times they were ripped down the middle, Solomon Lartey, a records management analyst told the news outlet.

“We got Scotch tape, the clear kind,” Lartey said. “You found pieces and taped them back together and then you gave it back to the supervisor.”

Lartey said his entire department would have to tape together paper that the president had torn to pieces. Lartey and Reginald Young Jr., another records analyst, were “abruptly terminated” from their jobs earlier this spring Politco reports.

This isn’t the first time the president’s eccentric habits have come into focus since he took office. When eating dessert, Trump apparently gets two scoops of ice cream while everyone else gets one, and wants his daily intelligence briefings to have pictures and charts instead of a lot of text.

The paper-ripping is just the latest run-in the president has had with the Presidential Records Act. Last year, the National Archives and Records Administration told the White House to save all of Trump’s tweets, including ones he deletes or corrects.

But the idea that Trump rips up paper that should be preserved for record keeping was instantly mocked online.

Jesus, what a metaphor.

"But White House aides realized early on that they were unable to stop Trump from ripping up paper after he was done with it and throwing it in the trash or on the floor…. Instead, they chose to clean it up for him."

"…White House aides realized early on that they were unable to stop Trump from ripping up paper after he was done with it and throwing it in the trash or on the floor," #ToddlerInChief https://t.co/Ri95XxUB4J

« Trump has a habit of ripping up all of his paper » … like all mob bosses and thugs: leave no paper trail. https://t.co/dscZZkbnDt