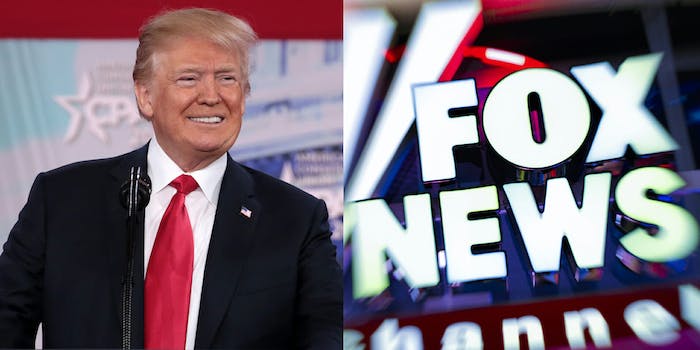 But a new clip put together by CNN shows that the president may like the news outlet a bit too much, showing him repeating several talking points said by Sean Hannity, Tucker Carlson, and Fox & Friends during a press conference at his Mar-a-Lago resort last week.

The clip, which aired on CNN’s Reliable Sources, put together snippets of Fox News hosts talking about the FBI, Special Counsel Robert Mueller, and the Russia investigation next to Trump’s response to a question at Mar-a-Lago.

The similarities were striking.

In early March, Hannity lamented how the FBI was not able to “look at the DNC servers” amid the email hack that took place during the 2016 election. On Wednesday, Trump brought up the server.

The president also repeated talking points about him being “tough” on Russia.

During the conversation, the CNN anchors wondered if Fox News was running the country.

“We have never had an administration as close to a partisan media outlet as this one,” John Avlon, editor-in-chief of The Daily Beast, said on the show.