In Texas capital, Trump returns to ‘the wall’

'Mexico, in fact, will pay for the wall.'

Tasked with carrying the Lone Star State for the Republican party for a 10th straight presidential election and with only a six-point lead, the nominee landed in Austin Tuesday for a pair of high-profile appearances. Amid disastrous polling data and staffing shakeups, Trump spoke with conservative pundit Sean Hannity at the Austin City Limits studio, where he pivoted toward the center on immigration. His rally at the Travis County Expo Center (a literal rodeo) flew in Rudy Giuliani—and made its pitch to undecided voters of color. “You will be voting for a more inclusive country,” Trump said to undecided African-American voters. “She sees communities of color only as votes.”

“I will be the greatest jobs president that God ever created,” Trump added.

The presidential hopeful also re-emphasized his plan to have Mexico pay for a wall along the U.S. border—a controversial campaign pledge he failed to mention during his prime-time speech at the Republican National Convention.

These claims drew the night’s loudest applause. Trump likewise stayed bullish on immigration, attacking Clinton for a “catch and release” strategy toward Syrian refugees and calling their entry into the U.S. a “Trojan horse.”

Trump brought five border patrolmen and eight mothers from the Remembrance Project onstage. The moms said their sons had all been killed by illegal immigrants. They collectively endorsed Trump.

“My son was systematically tortured, beaten, murdered, and set on fire,” a Remembrance Project spokeswoman said. “Trump will end this slaughter of Americans.”

Trump finished his speech with character attacks on Clinton.

“Hillary Clinton thinks she’s above the law,” he said of her email scandal. “We will have a tremendous victory on Nov. 8. We will win and we will make America great again: You will be voting for justice, fairness, equality, and jobs.” 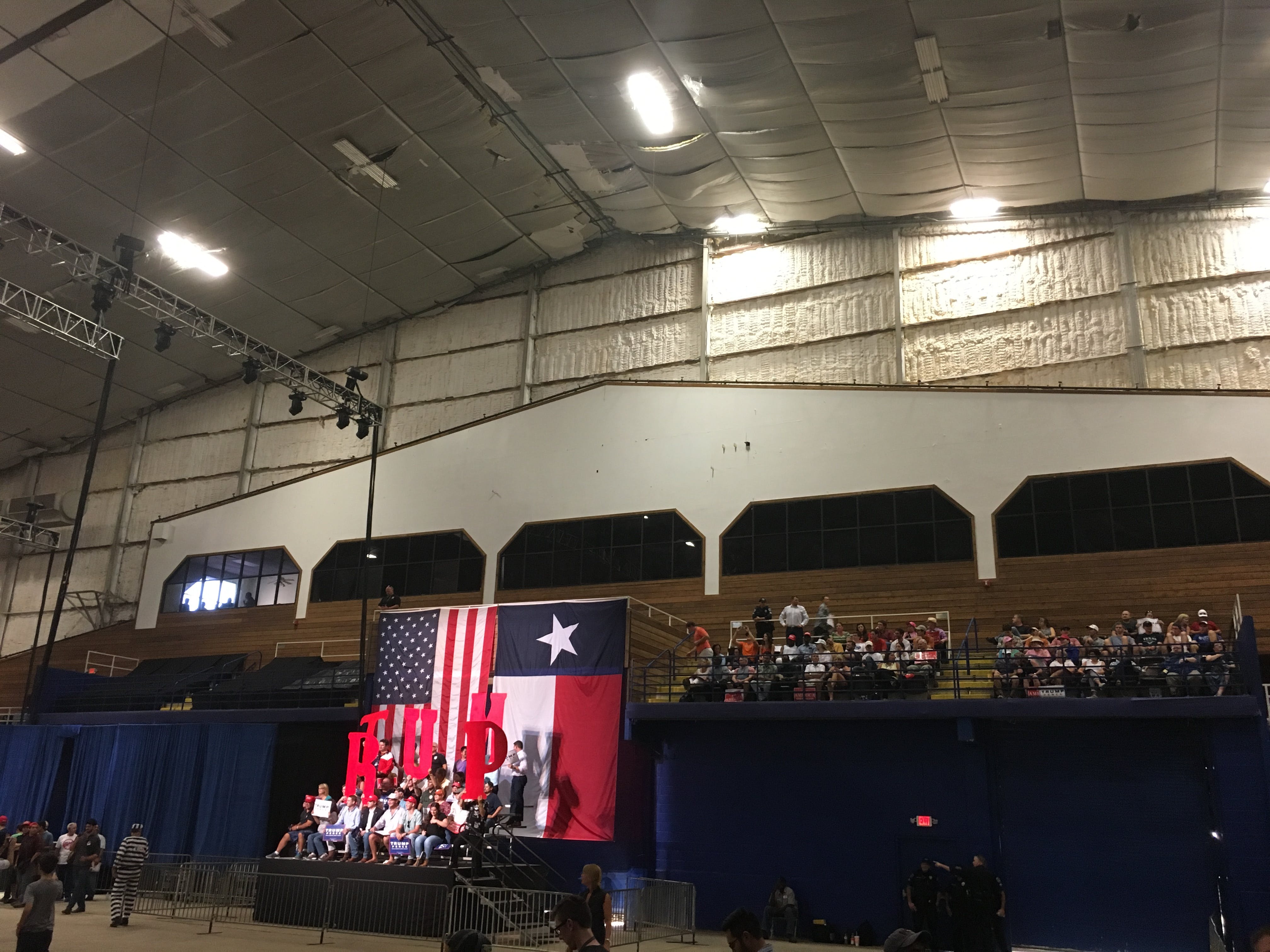 The audience was mostly white, but there were Latino attendees like 30-year-old Trump supporter Regino Lopez. “I want to hear more about what he wants to say to the Hispanic vote to ensure them that the immigration reform that he has will be humane and good for all Americans,” Lopez told the Daily Dot. “People blow his comments out of proportion.”

An African-American undecided voter from Flint, Michigan, donned a “Hillary For Prison” T-shirt, called Trump a patriot, and said that he wanted to “hear him out.” He championed Trump because “he’s not bought off by foreign interests.” He said the Clinton-era North American Free Trade Agreement was his No. 1 gripe with the Democratic nominee.

“They put my grandfather out of work, my uncles out of work, devastated the city,” he said. “They took the major money-making source in Flint [the auto industry] and they shipped it to Mexico.”

In March, Sen. Bernie Sanders attacked Clinton for NAFTA and won the Michigan Democratic primary in the season’s biggest upset.

Some spectators, Zohaib Qadri, 26, were there out of mere curiosity. Qadri is a libertarian and Youth for Johnson/Weld‘s Texas director. “I think most Americans are libertarian-leaning: fiscally conservative, socially liberal,” Qadri said. “Gary Johnson is a very honest politician.”

Qadri relayed a text from campaign colleague Ben Farmer, director of PR for the Libertarian Party of Texas, who touted record membership and funding “since the old parties nominated Hillary and Trump.” 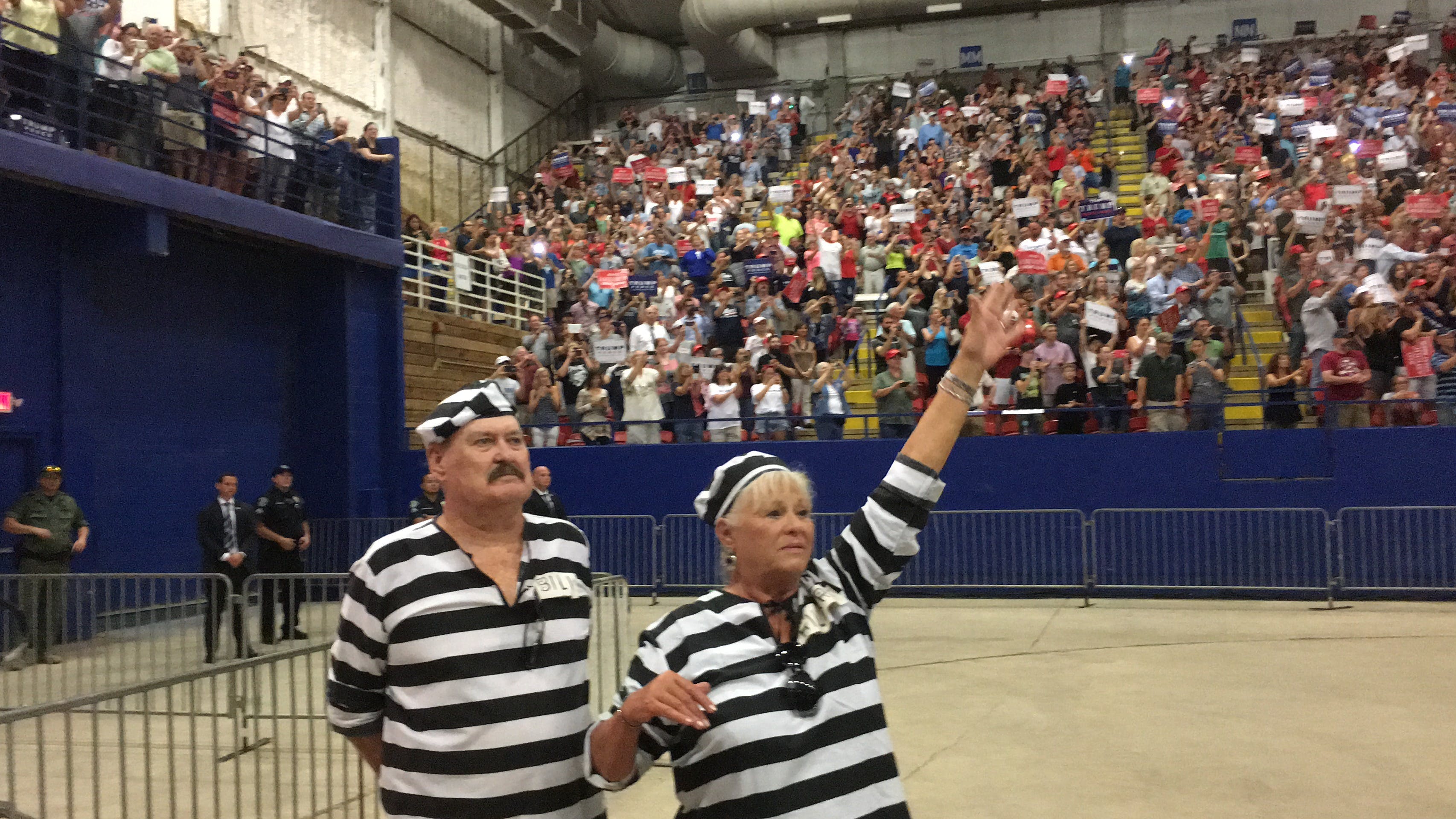 “You’re full of shit,” a protester yelled at Trump during the rally. He was drowned out by chants of “Trump.”

At least five protesters interrupted Trump’s speech, though only a woman wearing a “Jesus wouldn’t vote Trump” shirt was escorted out of the arena.

“I will say this: The Bernie protesters were much better; these have very little energy,” Trump said.

The same criticism was applicable to the crowd, which was overwhelmingly polite, calm, and surprisingly sparse.

“Wow, can we fit any more people in here?” Giuliani said upon introducing Trump.

The answer was a resounding “yes.”