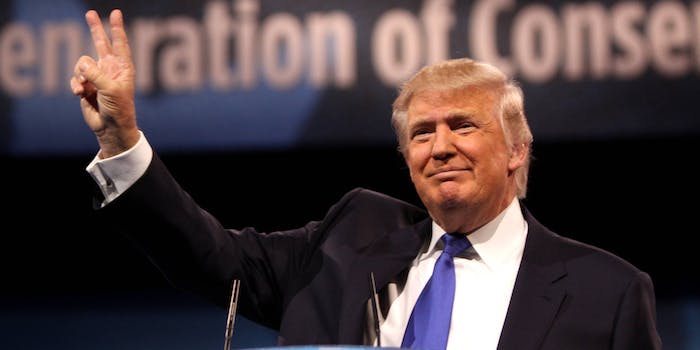 In 2011, Donald Trump appeared as a guest on a New York-based radio show to talk about how President Barack Obama’s high approval numbers with African-Americans could hamper the theoretical presidential bid he was mulling for the 2012 election cycle.

“Look at Hillary Clinton,” Trump continued, referencing the 2008 Democratic presidential primary that saw Obama besting his soon-to-be Secretary of State with a coalition that largely consisted of minority voters. “Hillary Clinton did so much for the black population, so much and got very few votes.”

Looking back at this interview from five years in the future, the entire thing is drenched in irony. It isn’t just that Trump’s desire to pile on President Obama—who would go on to deliver a brutal roast of the real estate tycoon at the White House Correspondent’s Dinner just days later—was so intense that he was willing to heap praise on the record of “Crooked Hillary.” It’s also Trump’s assessment of his popularity within the African-American community.

While Trump hasn’t been polling well with African-Americans across the board, one recent Wall Street Journal/NBC News/Marist poll of Ohio voters showed Trump polling at an astonishing zero percent among African-Americans.

The poll has a margin of error of 3.4 percent (likely larger for the subset of African-Americans), so Trump could be attracting the support of over 3 percent of blacks. Or he could be polling at -3.4 among blacks in those states, which isn’t technically possible but kind of feels right on a gut level. Speaking of things that feel right but might actually be wrong, it’s always better to look at polling averages than individual polls because a single poll showing a striking result could simply be an outlier.

Nevertheless, Trump has consistently polled in the single digits among blacks throughout the campaign—even though he boasted last August that he would, “win the African-American vote … because I create jobs and they want jobs.”

In June, Trump inadvertently highlighted his small number of black supporters when he singled out the one black person in the audience for a rally in Redding, California, saying, “Look at my African-American over here.”

The man Trump singled out, a black Republican running for Congress, told NPR he wasn’t actually a Trump supporter and was only holding a sign that read “Veterans for Trump” to block the sun from shining directly onto his face.

Trump’s relationship to the black community, especially in his hometown of New York City, has never been particularly smooth. Despite the widely-spread viral meme stating that, “Donald Trump has been in the public eye for over 30 years … and he was never once accused of being racist by anyone until he decided to run against the Democrats,” there have been a number of times when Trump’s actions have drawn the ire of many African-Americans.

In 1989, a white female jogger was beaten and raped while running through Central Park. Within hours, police had arrested five teenagers—four black and one Hispanic—in connection with the crime. After more then 24 hours of interrogation, they confessed to the crime but later recanted.

Trump took out a full-age ad in the city’s largest newspapers calling for the reintroduction of the death penalty to ensure the suspects were killed for the crimes.

In 1989, Trump took out a full-page ad demanding the death penalty for the Central Park Five. (All were innocent.) pic.twitter.com/qhjxjWZKNl

However, as it turned out, the Central Park Five were innocent. More than a dozen years later, Matias Reyes, a serial rapist who was arrested shortly after the teens were taken into police custody, confessed to the crime, and DNA evidence back up their confession. The teens were eventually let out of jail and, in 2014, the city paid them $41 million for malicious prosecution.

Michael Warren, a lawyer representing the men, called on Trump to apologize for using his wealth and fame in an attempt to have the death penalty applied to his wrongly accused clients. “It was outrageous, the manner that Mr. Trump used to engage in his own personal form of rhetoric. A lot of people felt it colored the eyes of prospective jurors who ultimately sat on the case,” Warren said in a 2002 interview with the New York Times. “Now it’s even more appalling, with new evidence that points exclusively to another person. I think Donald Trump at the very least owes a real apology to this community and to the young men and their families.”

Sadly, because president Obama has done such a poor job as president, you won’t see another black president for generations!