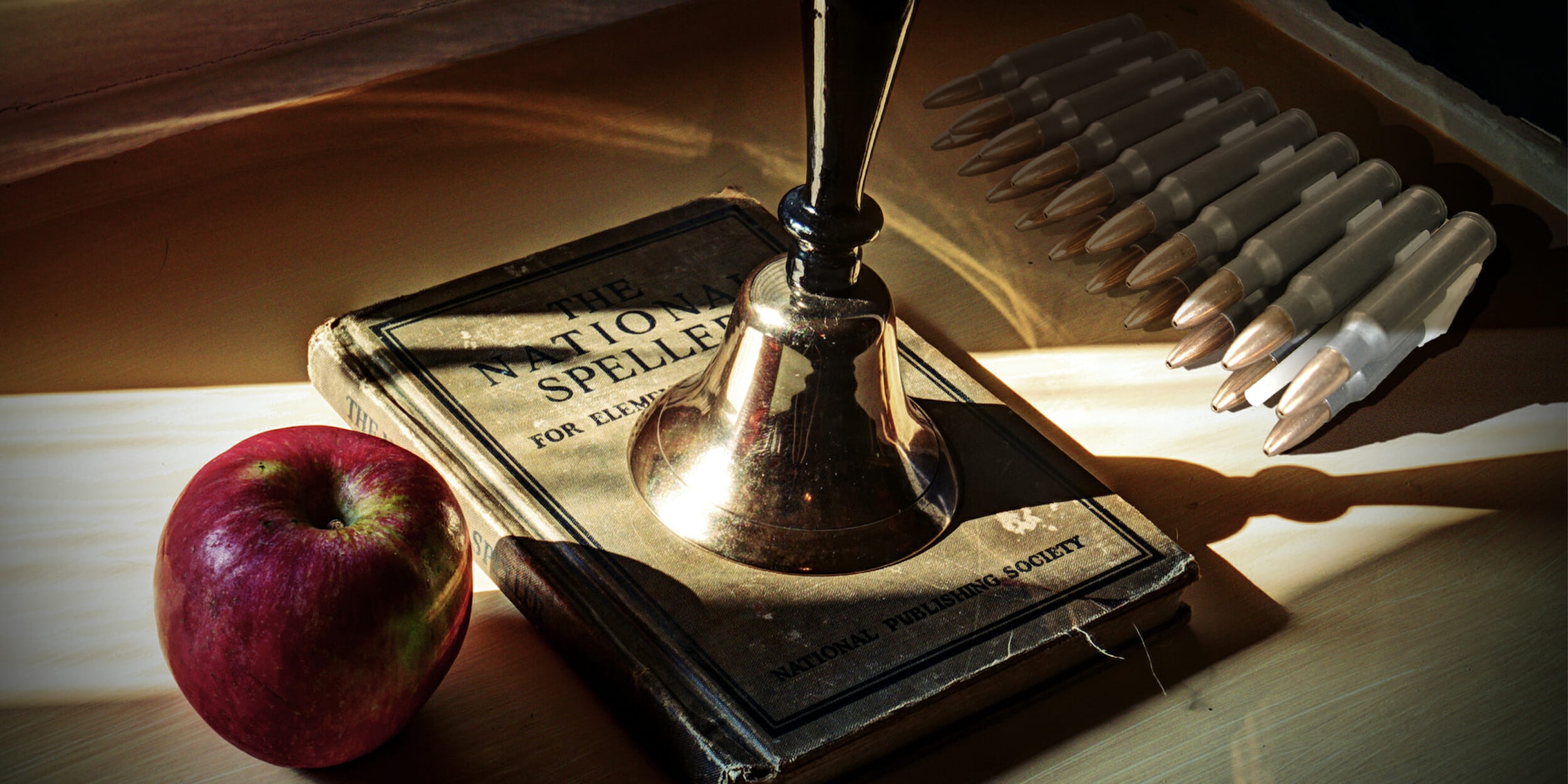 Experts are divided on the matter.

President Donald Trump’s proposal to arm teachers in the wake of the school shooting in Parkland, Florida has drawn outrage from educators and parents nationwide. But what would such a plan look like, and would it actually work?

The logistics of Trump’s plan to arm educators are fuzzy. The president has suggested bonuses for teachers who elect to carry guns or allowing teachers who are military veterans to carry guns on campus. Not all educators would be required to bear arms—Trump proposed a ballpark number of 20 percent.

“So let’s say you had 20 percent of your teaching force, because that’s pretty much the number. If you had a teacher who was adept at firearms they could very well end the attack very quickly,” said Trump to a gathering of parents and students impacted by the Parkland shooting.

The National Education Association has come out in vehement opposition to Trump’s solution to mass shootings.

“Our teachers do not want to be armed. You know, I’m an eighth-grade science teacher—the wonder years. I cannot even imagine having—on top of all the responsibilities I have teaching my students the wonders of science, making sure that they are valued and respected for the unique human beings they are, and now I’m being asked to carry a gun and make life-and-death decisions. That is absolutely not what we are trained to do and not what we want to do for our students,” said NEA Vice-President Becky Pringle in an interview with NPR.

Except hundreds of school teachers are already doing exactly that. School districts in states such as Arkansas, Texas, South Dakota, Idaho, and Ohio have had programs in place for years that allow teachers to carry guns. Many rural or smaller school districts say they don’t have the resources to hire an armed security officer so must rely on armed staff, or say they are located too far away from a police station.

South Dakota has allowed teachers to carry weapons since 2013 in a “school sentinel” program, in which school employees who undergo 80 hours of training carry guns on campus. A total of 13 percent of the more than 1,000 public school districts in Texas arm their educators, according to the Texas Association of School Boards.

A Florida state legislature committee has already approved a $67 million dollar “school marshal” program that proposes putting 10 teachers trained to carry a gun in every school. This has drawn furor from gun control advocates, not to mention parents and students of the recent school shooting in Parkland. According to the Tampa Bay Times, the bill to arm teachers proposes a goal of 37,000 armed teachers statewide, and would cover the costs of background checks, drug testing, psychological assessments, and 132 hours of training. Florida teachers would be provided with a one-time stipend of $500 to cover the costs of the gun.

What do experts say about arming teachers?

But since changes in 2012, there’s no evidence that arming teachers has in any way been effective.

“Thus far, none of these approaches has been demonstrated to be effective through evaluation and testing, and law enforcement officers and school officials remain heavily divided on the appropriateness of these approaches. However, it is clear that considerable time, energy, and fiscal resources are being devoted to these approaches,” the study notes.

The Daily Dot reached out to Michael Dorn, the executive director of Safe Havens International, by email. Dorn has worked with schools both in the U.S. and all over the world who have armed teachers.

Dorn said that it is actually very common in countries with an unreliable police force or high threats of terrorism to arm school teachers.

“It is actually somewhat common to very common in certain regions like Israel, Thailand, the Philippines, and parts of Africa for school employees to carry or store firearms for protection from attack. In Israel and Thailand, many educators are armed due to the threat of terrorism,” noted Dorn.

But Dorn adds that Safe Havens typically recommends arming teachers in countries where “the risk of violence is far greater” than in the United States.

“While our media focuses on the tragic mass-casualty attacks, the reality is that it is very rare for a school with a truly good security approach to experience such an attack,” stated Dorn.

“To date, I know of only three incidents that have been averted or interrupted by armed civilian educators,” said Dorn.

In his experience as school district police chief, Dorn noted several incidents in which armed officers were successful in preventing mass shootings.

“Our officers directly averted more than a dozen planned school shootings and one planned bombing. But these were all averted before shots could be fired. I will say that several of these would have clearly resulted in shootings if our officers had not been armed,” said Dorn.

But if the shooter is successful, the situation becomes dire—even with an armed officer present.

“In my experience, these events occur a lot more rapidly than most people realize. The last case I completed a review on, the shooting lasted about 16 seconds and was over with nearly a minute before the armed officer assigned to the school could arrive,” stated Dorn.

In situations where dozens of lives can be lost in a matter of minutes, waiting for a traditional police squad to respond to the scene of the crime seems outrageous. Trump argued on Twitter that the average school shooting lasted three minutes, while the average response time for law enforcement was five to eight minutes. The president’s reasoning was that by arming teachers, a potential shooter could be stopped “instantly” and would be a “great deterrent.”

….History shows that a school shooting lasts, on average, 3 minutes. It takes police & first responders approximately 5 to 8 minutes to get to site of crime. Highly trained, gun adept, teachers/coaches would solve the problem instantly, before police arrive. GREAT DETERRENT!

Trump’s statistics on timing aren’t off but misses the point. Mass shootings—even mass school shootings—are still infrequent enough that averaging their timing can lead to widely skewed results. They vary widely in time, scale, and nature. A study of active-shooter incidents by the FBI between 2000 and 2013 found that 44 of 63 shootings in which the duration could be determined ended in five minutes or less. Twenty-three of those ended in two minutes or less, according to the study. Despite having an armed officer present on campus, the shooting in Parkland lasted a total of six minutes and ended only when armed officers arrived at the scene. The Sandy Hook massacre lasted less than 11 minutes and ended when shooter Adam Lanza killed himself.

But the FBI study also provides a very strong argument against armed school teachers and the case for a “good guy with a gun.” Unarmed citizens safely restraining the shooter have proved even more effective than armed civilians or even armed law enforcement.

Between 2000 and 2013, there were a total of 160 active shootings. The majority of shootings, a total of 90, ended because the shooter decided to end the shooting either by committing suicide or fleeing the scene. This was the case in the Sandy Hook massacre, and other more recent ones, such as the Orlando nightclub shooting, the San Bernardino shooting, and the Charleston Church shooting.

And how many shootings were stopped by armed civilians? A grand total of five.

Even less successful were law enforcement officers in stopping shootings. Only in two of the 160 active shootings between 2000 and 2013 did armed police officers stop the shooter.

This number included Antoinette Tuff, a bookkeeper at a suburban elementary school in Atlanta who successfully talked armed 20-year old Michael Brandon Hill out of opening fire after he threatened to kill her and hundreds of other young students.

Tuff is in vehement opposition to the idea of arming teachers.

But Kasey Hansen, a special education teacher in Utah, began bringing a gun to school after the Sandy Hook massacre.

“It broke my heart to think that all the teachers could do was huddle their kids in a corner, stand in front of them and pray that nothing was going to come through that classroom door,” Hansen told ABC News’ Nightline.

Like with most divisive issues proposed by Trump, this one doesn’t have a good answer.