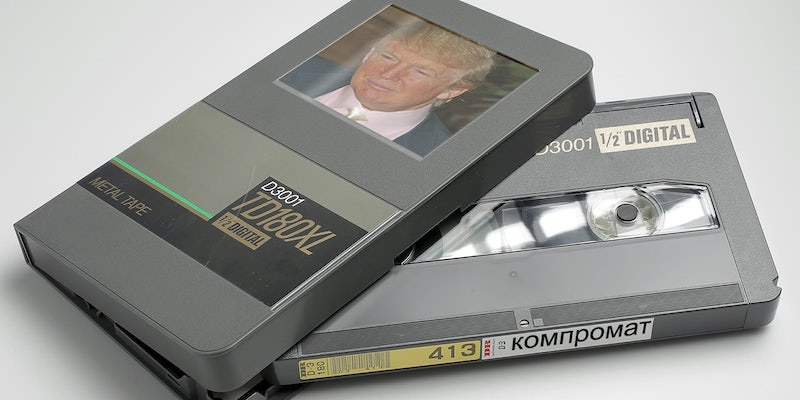 Will we ever see the Donald Trump pee tape?

One year after the Steele dossier, here's everything we know.

At the beginning of 2016, you wouldn’t have guessed that the fate of our next president would revolve around terms like “kompromat” and “golden showers.” But those are now a part of American political discourse thanks to the efforts of former MI6 agent Christopher Steele. And it centers around one salacious allegation: the Donald Trump pee tape.

And this week, believers in the so-called “pee tape” got a huge boost. None other than former FBI Director James Comey said it’s possible it exists.

Comey even said the president asked him to investigate, to assure his wife, Melania Trump the rumors were false.

What is the Donald Trump pee tape?

In a 35-page dossier of Trump opposition research leaked by BuzzFeed last year, Christopher Steele, a former British spy claimed that a Russian spy agency collected X-rated footage of Trump in Moscow in an effort to blackmail him. The yet-to-be-corroborated account details Trump booking the presidential suite of the Moscow Ritz-Carlton—where President Barack Obama and Michelle Obama once stayed—and paying a bevy of prostitutes to urinate on the bed.

The dossier alleges that the Russian intelligence agency FSB, the Kremlin’s version of the CIA, bugged Trump’s hotel room with cameras and mics in an effort to gather compromising intelligence on him. Sources in the dossier claim that the incident happened in 2013, the same year that Trump was in Moscow for the Miss Universe pageant, but long before he announced his intention to run for president.

The pee tape is an explosive allegation that not a single news outlet has been able to confirm in the year since the Trump dossier was leaked. So does the Trump pee tape exist?

Trump and his administration have denied the findings of the dossier, calling it the “fake news dossier” and accusing Hillary Clinton and the Democratic National Convention of being involved.  Steele compiled the dossier on behalf of a political research firm known as Fusion GPS, which was conducting opposition research on Trump on behalf of the Washington Free Beacon and then later the Clinton campaign and DNC.

Trump obliquely denied it in a press conference in January 2017, before he took office, noting his germophobia.

Fusion GPS founder Glenn Simpson was questioned last August by Senate Judiciary Committee lawyers. In a transcript released this month, it was revealed that Senate lawyers asked Simpson about what led Steele to his conclusion that the FSB had the ability to blackmail Trump.

In a rather long-winded response, Simpson referred to the pee tape indirectly, calling it “the alleged incident.”

“Well, the facts are—beyond what’s here I don’t have any additional facts. The alleged incident that’s described here is the one that he was referring to. As I say, I don’t have really any additional information beyond this except that—I mean, it’s probably in here somewhere actually, but it’s well known in intelligence circles that the Russians have cameras in all the luxury hotel rooms and there are memoirs written about this by former Russian intelligence agents I could quote you. So the problem of kompromat and kompromating is just endemic to east-west intelligence work. So that’s what I’m referring to. That’s what he’s referring to.”

Throughout his testimony—Simpson, a former Wall Street Journal reporter who has reported on Russian corruption in the past—accounted for Steele’s reliability and professionalism. A former intelligence official with extensive sources in Russia, Steele also had a track record of producing good, error-free work for Simpson. Steele told the Guardian that he believed the contents of his dossier to be “70-90 percent accurate.”

But the pee tape stands out as one of the most memorable and highly detailed anecdotes in the Trump dossier. If one of Steele’s sources made up the existence of the tape, it would likely derail the contents of the entire dossier in the eyes of many.

What could Russia do with the Donald Trump pee tape?

If Trump actually did partake in a “golden showers” episode, he picked the wrong country to be the host. Russia has a long, storied history of collecting damaging information on people in power in an effort to punish them or blackmail them into doing the government’s bidding. The Russian word kompromat refers to this practice of collecting compromising material on someone and then later releasing it to the public to destroy the subject’s credibility. Kompromat has been collected on Russian journalists, politicians, and even U.S. diplomats. There’s even a Russian state agency exclusively tasked with collecting kompromat. Sex videos are a common form of kompromat, as well as pictures.

When the dossier was first leaked in January 2017, the Kremlin vehemently denied any involvement. But the cat may be out of the bag. The Independent reported that far-right politician Nikita Isaev, speaking on Russia-24 last fall, said that Russia should release its kompromat on Trump in retaliation for the closing of Russian diplomatic compounds.

When asked if the Russian government actually possessed kompromat on the U.S. president, Isaev replied: “Of course we have it!”

The next steps in the pee tape scandal will mostly be a waiting game—for either Russia to release the actual footage or for it to be leaked by another source, if it in fact exists. Steele has not revealed more information about the pee tape or his sources, and there’s no sign he will do so in the near future. Senate Republicans have recommended that the Department of Justice press criminal charges against Steele for lying to the FBI, but there’s no guarantee the agency will take up their suggestion.

And if it doesn’t exist, we may never truly know.

The only bigger mystery is how the public would react to yet another lurid revelation about Trump’s past—and what repercussions he would face—if any.