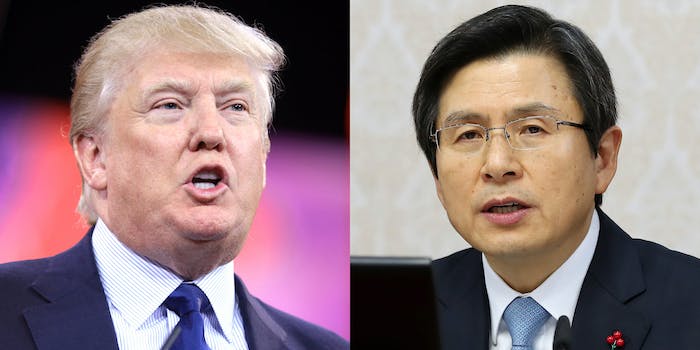 A South Korean official has accused President Donald Trump of “shocking ignorance” regarding the country’s history, after he claimed that “Korea actually used to be a part of China.”

The president made the comments during an interview with the Wall Street Journal last week, claiming that Chinese President Xi Jinping had given him an overview of the region’s history when the pair spent time together at Trump’s Florida Mar-a-Lago golf resort.

.@FLOTUS & I are honored to welcome the President of the People's Republic of China, Xi Jinping, & Madame Peng Liyuan to the United States. pic.twitter.com/n6ZX4AySNH

“[Xi] went into the history of China and Korea…,” Trump said. “And you know, you’re talking about thousands of years … and many wars. And Korea actually used to be a part of China.”

Now, outraged South Koreans want to clarify whether China’s leader did, in fact, relay a Chinese nationalist version of how the ancient kingdoms related to one another. A growing school of revisionist historians in China allege that the peninsula was part of the Chinese empire.

Seoul’s foreign ministry spokesman, Cho June-hyuck, made a statement on Thursday to underline his country’s recognized sovereignty: “It’s a clear fact acknowledged by the international community that, for thousands of years in history, Korea has never been part of China.”

However, with a national election looming, South Korean politicians and media outlets began to weigh in.

“We are dumbfounded that the leader of 21st century China made such a ridiculous claim. If Trump really conveyed Xi’s words correctly, it is nothing but a grave challenge to the identity of the Korean people,” an editorial published in Seoul newspaper Korea Joonang Daily.

Former South Korean ambassador to London and Tokyo Rah Jong-yil, in an interview with the Telegraph, said he believed that Trump had “bought” into Xi’s “silly nationalism.”

“Somebody needs to enlighten Mr. Trump about the facts,” Rah continued.

The Korean peninsula was invaded by several Chinese dynasties throughout history, but Koreans maintain that they were never under Chinese rule.

“In the distant past, Korea may have looked up to China as a model of political or economic development, but today we consider the communist-led nation to be economically, politically and socially backward,” Rah explained.

At the time of the conversation, Trump appears to have been trying to persuade Xi, whose country is an ally of North Korea, to help him mediate with the Kim Jong-un’s communist regime and to put a stop to its ongoing nuclear tests. After his meeting with the Chinese leader, Trump said that he realized it was “not so easy” for China to influence the North’s dictatorship.

North Korea has engaged in nuclear and ballistic missile tests for years and is believed to be currently preparing its sixth nuclear test, concerning its democratic neighbors Japan and South Korea, which are both U.S. allies.

Trump became preoccupied with placing increased military pressure on Kim’s regime to halt their weapon experimentation in mid-April, despite calls from China to continue to pursue economic sanctions and peaceful diplomatic solutions.