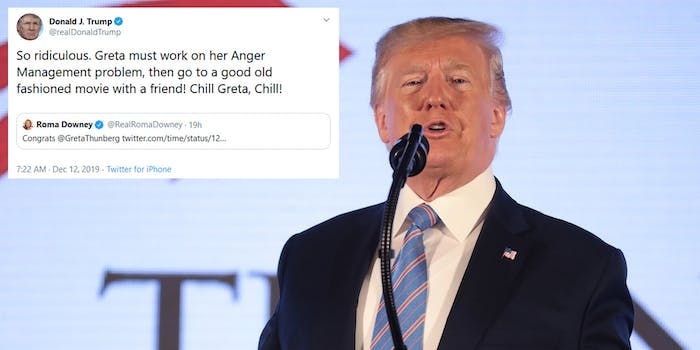 This isn't the first time Trump has mocked the teenage activist on Twitter.

President Donald Trump on Thursday called it “ridiculous” that teenage climate activist Greta Thunberg was named 2019 Person of the Year by Time magazine, before saying that he thinks she needed to “work on her anger management problem.”

The president made the remarks in a mocking tweet on Thursday morning. Thunberg beat out Trump and other candidates when she was named the 2019 Person of the Year on Wednesday by the magazine.

“So ridiculous. Greta must work on her Anger Management problem, then go to a good old fashioned movie with a friend! Chill Greta, Chill!” Trump wrote on Thursday.

So ridiculous. Greta must work on her Anger Management problem, then go to a good old fashioned movie with a friend! Chill Greta, Chill! https://t.co/M8ZtS8okzE

This isn’t the first time that Trump has mocked the teenager on Twitter.

In September, the president mocked Thunberg after she gave an emotional speech in front of the United Nations where she criticized world leaders for the effects of the climate crisis.

Trump shared a clip of Thunberg’s speech on Twitter, adding that she “seems like a very happy young girl looking forward to a bright and wonderful future. So nice to see!” Many people took the tweet as sarcastic.

In response, Thunberg changed her Twitter bio to reflect Trump’s tweet, changing it to: “A very happy young girl looking forward to a bright and wonderful future.”

As of Thursday morning, her bio reads: “A teenager working on her anger management problem. Currently chilling and watching a good old fashioned movie with a friend.”

Of course, Trump has a spotty history with Time magazine, so perhaps he was just jealous Thunberg beat him out?

Trump won the person of the year designation in 2016.