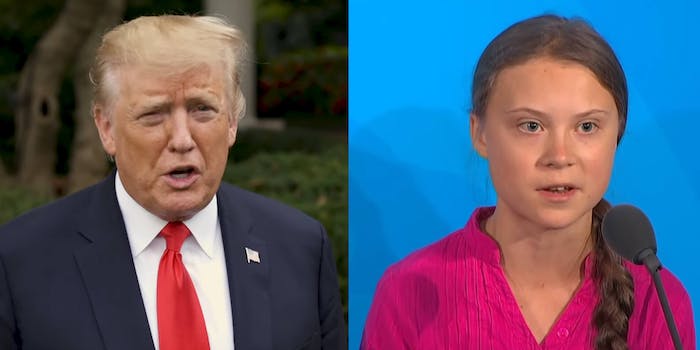 The bio change was noticed by a lot of people.

Greta Thunberg, the 16-year-old climate change activist, turned an apparent mocking tweet from President Donald Trump back on him on Tuesday when she changed her Twitter bio to reflect his comments about her.

On Monday night, Trump retweeted a segment of an emotional speech from Thunberg where she spoke to the United Nations and blasted world leaders for letting people die and suffer because of the effects of climate change.

“You have stolen my dreams and my childhood with your empty words,” Thunberg said on Monday. “And yet, I’m one of the lucky ones. People are suffering. People are dying. Entire ecosystems are collapsing. We are in the beginning of a mass extinction. And all you can talk about is money and fairy tales of eternal economic growth. How dare you!”

Trump, a noted climate change denier, shared a clip of Thunberg’s speech on Thursday night, adding his own commentary.

“She seems like a very happy young girl looking forward to a bright and wonderful future. So nice to see!” Trump tweeted.

The tweet was taken by many to be sarcastic.

One Tuesday, Thunberg had changed her Twitter bio to reflect the apparent sarcastic remark from Trump, changing it to read: “A very happy young girl looking forward to a bright and wonderful future.”

The Twitter bio change was noticed by many on social media.

"The Oscar for Best Burn goes to Greta Thunberg. And she can have a Nobel prize while she's at it". pic.twitter.com/wOHMORkwnW

Just when I thought she couldn’t get any cooler. #GretaThunberg pic.twitter.com/tkJTtpqEOm

Thunberg and Trump crossed paths on Monday during a United Nations Climate Action Summit, resulting in numerous memes and GIFs after she was spotted looking at him.