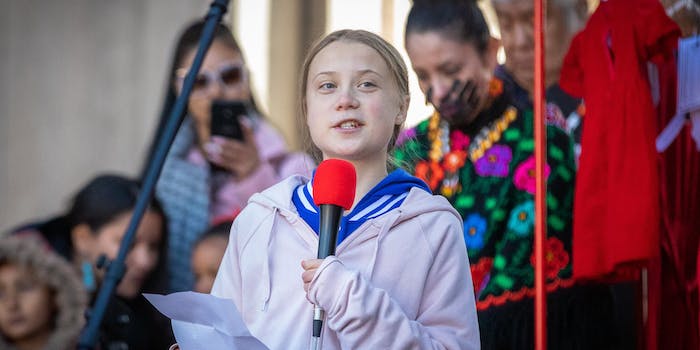 Thunberg is the youngest person to be named person of the year by the magazine.

Thunberg, who has gained national attention over the last year in a number of speeches highlighting the dangers of climate change, is the youngest person to be named person of the year by the magazine.

Edward Felsenthal, editor-in-chief of Time, told the Today Show on Wednesday that Thunberg’s activism made her the “biggest voice on the biggest issue facing the planet this year.”

“She became the biggest voice on the biggest issue facing the planet this year, coming from essentially nowhere to lead a worldwide movement,” Felsenthal said during an interview on Wednesday. “She also represents a broader generational shift in the culture.”

“Her rise in influence has been really extraordinary. She was a solo protester with a hand-painted sign 14 months ago. She’s now lead millions of people around the world, 150 countries, to act on behalf of the planet. She’s taken this issue–been really the key driver this year, taking this issue from backstage to center.”

Thunberg drew national attention earlier this year when she delivered an emotional speech at the United Nations Climate Action Summit.

“You have stolen my dreams and my childhood with your empty words,” Thunberg said during the speech. “And yet, I’m one of the lucky ones. People are suffering. People are dying. Entire ecosystems are collapsing. We are in the beginning of a mass extinction. And all you can talk about is money and fairy tales of eternal economic growth. How dare you!”

The Swedish activist also pushed back at President Donald Trump after he mocked her speech in a tweet—saying that she seemed “like a very happy young girl looking forward to a bright and wonderful future.”

Thunberg changed her Twitter bio at the time to copy what Trump said.