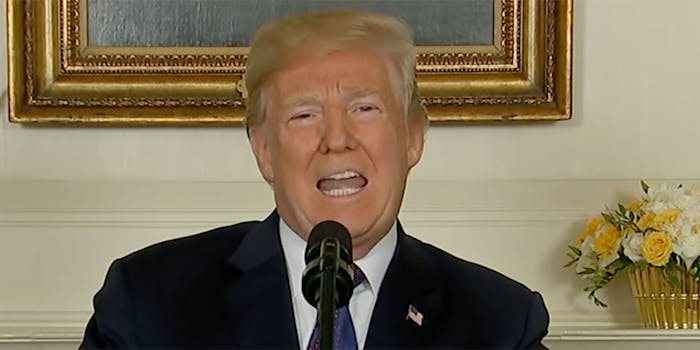 The strikes were a 'combined operation' with France and the U.K.

Trump said the strikes were a “combined operation” with France and the United Kingdom and that the U.S. is “prepared to sustain this response” until the Syrian regime discontinues its use of chemical agents.

He added that the U.S. would not have an “indefinite presence” in Syria.

“As other nations step up their contributions we look forward to the day we can bring our warriors home,” Trump said.
He also doubled down on warnings to Russia and Iran for their associations with Syrian regime leader Bashar al-Assad.
“The nations of the world can be judged by the friends they keep,” Trump said, according to the Associated Press.

He added: “Hopefully someday we’ll get along with Russia, and maybe even Iran, but maybe not.”

On Wednesday, Trump tweeted about the “nice and new and ‘smart'” missiles that would be fired in Syria, adding, “get ready Russia.”