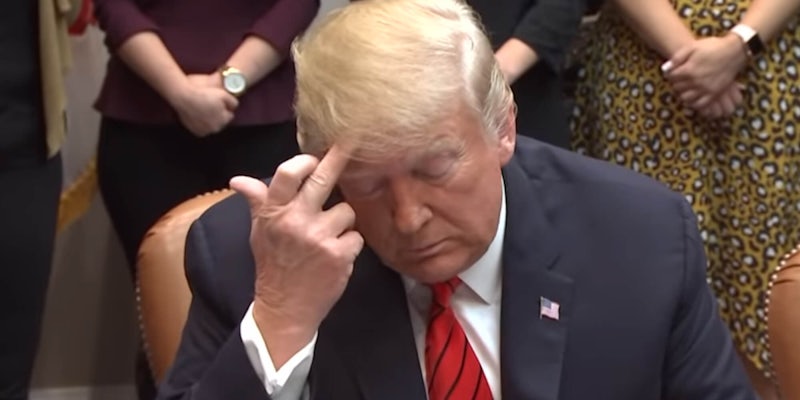 On Friday, NASA astronauts Jessica Meir and Christina Koch made an interstellar first, becoming the only all-women tandem to conduct a spacewalk.

But President Donald Trump has inserted himself into the conversation by apparently flashing a middle finger at one of the women when she corrected him.

Trump called Meir and Koch to congratulate them on their historic first. On the call, Trump got some of the facts wrong, saying they were the first women to walk in space.

When his mistake was explained to him by Meir, who wanted to note the other woman who walked in space before them, Trump scratched his forehead and ear, with one digit prominently featured.

When gently corrected by one of the astronauts about how other women have spacewalked, Donald Trump uses his middle finger to "fix" his hair.

How is this even real life? pic.twitter.com/9bnj7XfY1m

As noted by Gizmodo’s Matt Novak, Trump has frequently scratched at his head with his middle finger when bothered, like during a Black History Month listening session, and while discussing NFL players protesting police brutality.

Detractors will see a rude gesture by a churlish world leader, and his supporters will see an absurd outrage over someone scratching an itch.

So was he upset he was corrected by a woman about space history and did he secretly flip her off? Even if he was, it wouldn’t be the most shocking thing he’s done this week.