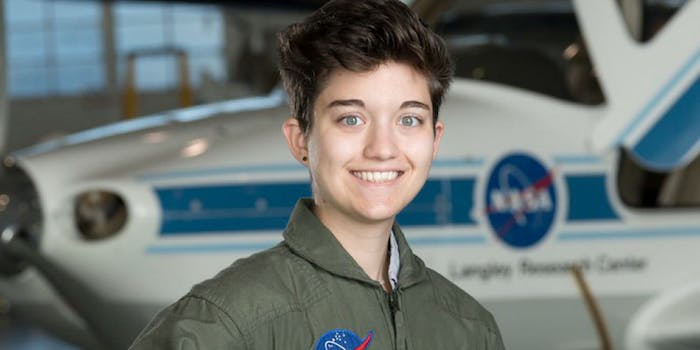 They're receiving praise from their fellow government employees.

Yesterday, the Supreme Court issued a 5-4 ruling that lifted two injunctions preventing the Trump administration from banning transgender service members from the military. The move revived a two-year struggle on the president’s behalf that puts the trans community in his administration’s crosshairs. But one nonbinary intern for NASA is going viral after speaking out about the ban.

V Wegman, who uses they/them pronouns, studies Communication at Ohio State University and worked at NASA Langley Research Center as a fall semester intern from August to December 2018. Just three hours after the Supreme Court ruling was announced, Wegman decided to share their story with Twitter. In a tweet from 11:36am CT, they attached a photo of themselves in their NASA uniform and defended their work as a government employee.

“I’m a nonbinary NASA intern. Nothing about my identity makes me any less capable of working in the government,” Wegman tweeted on Tuesday. “This administration is manufacturing oppression as a distraction from real issues. #TransMilitaryBan”

Wegman also criticized the government shutdown, saying both their coworkers and them are “getting pretty desperate #shutdown.” By one day later, Wegman landed over 4,000 retweets and 19,000 likes on their post. The Daily Dot reached out to Wegman for comment and is awaiting their response.

I’m a nonbinary NASA intern. Nothing about my identity makes me any less capable of working in the government.
This administration is manufacturing oppression as a distraction from real issues. #TransMilitaryBan
PS my coworkers and I are getting pretty desperate #shutdown pic.twitter.com/VEBUiUrpI0

It didn’t take long for Wegman to earn Twitter’s respect. Their fellow government employees quickly praised their post for one, including NASA coworker Andrés Almeida.

As a fellow government worker, who interacts daily with veterans and military personnel, please know you 100% have my support. <3 The #TransMilitaryBan is a major part of the systematic attempt by the Tr*mp admin to hurt trans individuals, and we will stand against it.

Others showered Wegman with support for speaking out.

You’re amazing!!! I have so much respect for you!

Even a Deadpool-themed #resist account gave them a clap.

For the record, Wegman doesn’t have a SoundCloud or Instagram to plug. Instead, they’re looking for full-time jobs, as “the shutdown has no end in sight.”

“The anxiety can not handle this level of attention but the depression craves positive feedback so the migraine sets in,” they tweeted last night.

In an interview with the Daily Dot, Wegman said they started at NASA through an unpaid internship with the NASA History Office followed by a paid internship at Langley, which is where the flight suit headshot was taken. While they are not currently working for NASA, they hope to return after graduating from Ohio State University this semester. But those plans are “hinging on the end of the shutdown” as “new hires and applications are not being processed during the shutdown as far as I’m aware.”

“I wanted to demonstrate that LGBTQ+ folks are not inherently incapable of working in federal government, which I believe is ultimately the source behind pushing for the ban,” Wegman told the Daily Dot over Twitter DM. “I recognize that I am not military; I am military-adjacent, but I hoped to demonstrate the presence of LGBTQ+ folks already proudly in federal government.”

As for creating the post, Wegman said this is not their first time speaking out “against unjust policies” or posting their flight suit headshot, but they did not expect to go viral after making the tweet.

“I’m honestly scared. I did not intend to be so exposed this way, but I’m comfortable being nonbinary and proud to be a NASA intern,” they explained. “I’m grateful I’ve built visibility for our community and give hope to folks—both strangers and friends.”

Wegman also stressed they are “not looking for pity” and they are “not sorry for myself or asking for help.” Rather, they want to use their position to help others in need.

“My LGBTQ+ experience is among the most privileged. I am white, able-bodied, and middle-class, my parents are liberal, and I am American,” Wegman told the Daily Dot. “If I can use this heightened platform to lift up those in dire need, that would be lovely.”