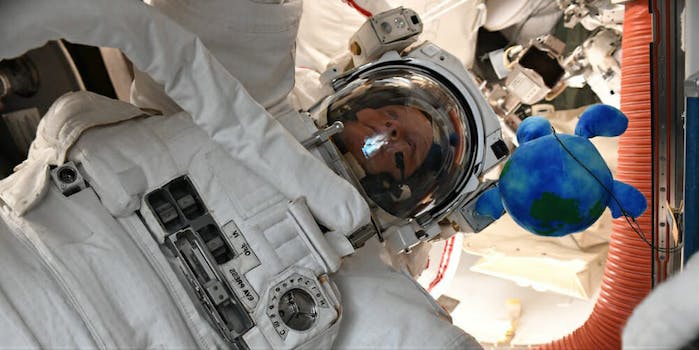 Hmm, I wonder how they could have prepared for this?

NASA has postponed its first-ever all-women spacewalk after it was discovered that it didn’t have enough spacesuits (a total of two) for the pair of women to go at the same time.

The spacewalk was to take place outside the International Space Station (ISS) to replace lithium-ion batteries for a pair of the station’s solar rays this Friday; astronauts Christina Koch and Anne McClain were set to be the dynamic duo on the first lady-only spacewalk. According to the Guardian, there have only been four times in the history of spaceflight that an expedition had two women crewmembers trained for spacewalks.

Unfortunately, history will not be made quite yet. Last Friday, McClain took a spacewalk and discovered that the spacesuit available to her didn’t fit as well as she thought it would. Stephanie Schierholz, a spokesperson for NASA, explained on Monday, “Anne trained in M and L and thought she could use a large but decided after Friday’s spacewalk a medium fits better. In this case, it’s easier (and faster!) to change spacewalkers than reconfigure the spacesuit.”

Spacesuits are made of several components, but the issue for McClain was that the large-sized hard upper-torso was too big for her. According to a press release from NASA, “Because only one medium-size torso can be made ready by Friday, March 29, Koch will wear it.” McClain will do another spacewalk on April 8 using the medium-sized suit.

The fact that NASA couldn’t come up with two “women-sized” suits wasn’t lost on Twitter, as users noted it highlighted how embarrassingly rare women astronauts are, but not so rare that NASA shouldn’t have had this covered.

If we can land people on the moon, surely we can find a solution to this quandary.

Seriously? They aren’t looking for a suit with an empire waist.

While many were disappointed that the all-women spacewalk was postponed, they also recognized that a delay in plans was preferable to putting the astronaut’s safety at risk.

I'm suuper disappointed about the all-woman spacewalk not happening as scheduled this Friday but I'm also super supportive of astronauts having the authority to say "I would be safer using a different piece of equipment." An all-woman spacewalk WILL eventually happen. https://t.co/LRob2RHvxq

Safety is #1! Hope everyone is equipped with size appropriate suits..but pls give us first all-female spacewalk #makehistory @Astro_DavidS best wishes with your walk 🇨🇦 #proud

I agree. But this also tells me how unprepared @NASA is to send women to space

Wish NASA would just plan an all female ISS crew! Way overdue for passing these milestones.

Even if the change in the line-up was necessary for safety, the lack of prepared equipment for the women on board appears to show a disregard for women astronauts.