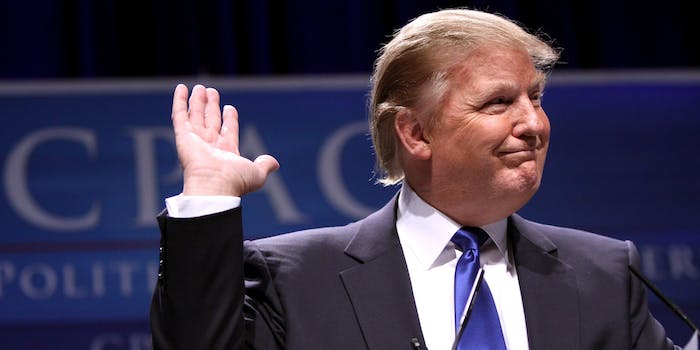 In one perfect tweet, son of Trump adviser cries ‘fake news’ and proves the opposite

Michael Flynn Jr. may want to check his facts.

But Flynn’s son isn’t buying it.

Michael Flynn Jr., whom Trump fired for tweeting a story about the unsubstantiated Pizzagate theory, called the Post’s story “fake news” in a tweet—while linking to documents literally proving the story’s authenticity.

Flynn Jr.’s Trumpian tweet disparaging the Post comes amid a backlash from Trump supporters over the definition of “fake news.” The term exploded into the national conversation following Trump’s election due to the widespread dissemination of intentionally made-up stories on Facebook and elsewhere.

“Fake news” has now been co-opted by some to mean any news story that is accidentally inaccurate, based on anonymous sources, or otherwise weakened by a lack of irrefutable evidence. Flynn Jr.’s charge is the most high-profile—if not the first overall—case of calling something fake news when that classification is categorically and provably false.

As for Lt. Gen. Flynn’s inappropriate sharing of classified material, that is primarily a story because it exposes hypocrisy in Flynn’s criticisms of 2016 Democratic presidential nominee Hillary Clinton, whom he disparaged repeatedly on the campaign trail for her baffling use of a private email system to conduct State Department business, including the sending of classified material.

At July’s Republican National Convention, Flynn led the crowd in chants of “lock her up!” while saying, “If I, a guy who knows this business, if I did a tenth, a tenth of what she did, I would be in jail today.”

Lt. Gen. Flynn, who was not authorized to share the classified material, provided the secret information to “various foreign military officers and/or officials in Afghanistan,” the documents show.

The case itself remains classified, so little is known about the nature of the information Flynn shared. However, the Army investigation found that Flynn’s actions caused “no actual or potential damage to national security as a result.” Like Clinton, Flynn faced no charges for improperly sharing classified material.