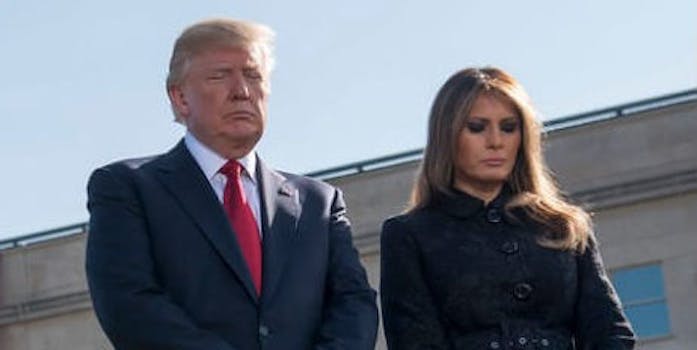 Chairman of the Joint Chiefs of Staff/Flickr

Trump jokes Melania wouldn’t cry if he got shot

The First Lady has yet to confirm.

During a private fundraiser attended by House Republicans on Tuesday night, President Donald Trump said that the First Lady wouldn’t cry her eyes out if he was shot.

As attendees dined on 1980s haute cuisine of steak, mashed potatoes, and asparagus at the Trump Hotel in Washington, the president treated them to an hour-long unscripted ramble. Multiple sources who attended confirmed to Politico that the diatribe included braggadocio, potshots at some of his favorite targets, and a bit of a roast of the most successful fundraisers in the room.

Recalling visiting House Minority Whip Steve Scalise (R-La.) in the hospital after he was shot at a congressional softball practice, Trump praised Scalise’s toughness and joked that he wouldn’t suggest someone get shot to lose weight.

Those still capable of being surprised presumably raised their eyebrows when Trump added that Scalise’s wife Jennifer “cried her eyes out when I met her at the hospital that fateful day … I mean not many wives would react that way to tragedy, I know mine wouldn’t,” as Politico reports.

Donald Trump told attendees at a House Repub fundraising event that
he didn’t believe first lady Melania Trump would cry for him if he ever got shot.
Trump praised Rep. Scalise for being “tough” & recalled visiting him in the hospital after he got shot by a gunman in 2017.

Rumors about the state of the Trumps’ marriage have persisted for years.

Their behavior and comments like these have only fanned the flames of speculation.

And for once, a lot of online folks agreed with Trump’s words.

Trump admits….that his wife wouldn't cry if he was shot? https://t.co/1I561MlYja

"My wife wouldn't cry if I was shot" is the best self-own since Steven Crowder had that tweet about boning his mom https://t.co/XQ0NSIWbV6

For years I’ve wondered if Trump was self-aware enough to know people hate him. Turns out he is so self-aware that he knows his wife wouldn’t cry if he got shot https://t.co/tsrSEYlADF

Other highlights of the fundraiser reportedly included Trump calling Rep. Chuck Fleischmann (R-Tenn.) “lil guy,” taking credit for Rep. Andy Barr (R-Ky.) winning his seat, and, best of all, the moment that it was finally over.