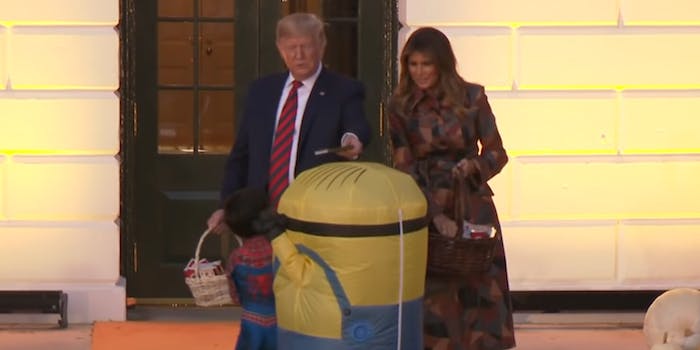 A lot of people noticed it.

President Donald Trump and First Lady Melania Trump participated in a trick-or-treat Halloween event at the White House on Monday, and it mostly featured exactly what you’d expect: a bunch of costumed children walking one-by-one to get a candy bar handed to them by the Trumps.

That is, except for one child, dressed as a minion from Despicable Me.

As the child walks up, instead of placing the candy (which were Hershey chocolate bars in White House branded wrappers, according to CNN) in the White House-branded bags each of the children were given, the president decided to place the candy bar on the Minion’s head, patting it a few times.

As the candy bar begins to teeter on the costumed head, the First Lady followed the president’s lead and does the same.

Eventually, both of the candy bars fall off the minion to the floor, and an aide gathered them.

The odd moment wasn’t missed by a lot of people—many of whom were puzzled at the way the Trumps decided to give out the candy.

I’m sorry but… did she just put candy on this kid’s head?pic.twitter.com/uM79Rdla47

So, Melania did too.

My lord, these people are effing idiots.

greatest video i have ever seen, peak comedy https://t.co/AQLwyK9vZX

Melania did try to give the child candy after it fell off, but the Minion had already moved on.