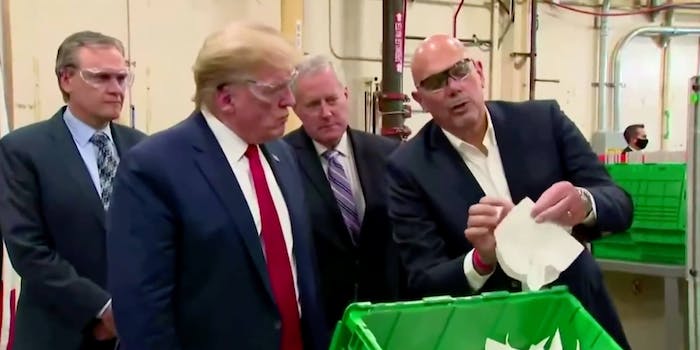 'I can think of no better metaphor for this presidency.'

In a Phoenix, Arizona mask factory, President Donald Trump’s visit was paired with a song choice that was a little too on the nose: a cover of “Live and Let Die” by Guns N’ Roses.

Trump also toured the facility without wearing a mask. Trump and Vice President Mike Pence’s refusal to wear masks while carrying out such duties has drawn heavy criticism. They have, from the White House, advised the public to follow CDC guidelines, which include wearing facial coverings in public, but do not follow the practice for themselves.

In this case, according to White House correspondent Jim Acosta, Trump and his entourage were told by officials they did not need to wear masks in the facility. The Honeywell facility Trump toured manufactures N95 respirators, heavy-duty masks which the CDC has advised remain reserved for healthcare professionals.

As reported by the Daily Mail, late-night host Jimmy Kimmel spearheaded commentary on social media, where he described the incident as a “metaphor for this presidency.”

“I can think of no better metaphor for this presidency than Donald Trump not wearing a face mask to a face mask factory while the song ‘Live and Let Die” blares in the background,” Kimmel wrote in a tweet.

“Example 1,000,001 from our reality that would seem too stupid/crazy if it was written as a movie script,” Twitter user @sorenwilliams wrote. “This is the worst timeline.”

Pence later wore a mask in subsequent public appearances after he was flayed online. We will see if Trump will follow suit.