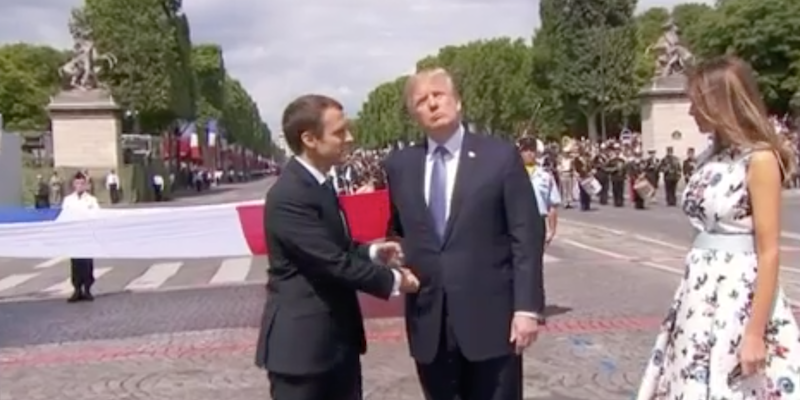 Trump has met his match in Macron.

Handshake aficionado and President of the United States Donald Trump on Friday sustained his art of the grip for a duration never before seen on the international stage.

During his ceremonial exit from Paris, Trump shook the hand of French President Emmanuel Macron for approximately 25 seconds, coupling it with a double-handshake combo with France’s first lady, Brigitte Macron, whom the president also hugged and kissed while maintaining his five-finger embrace of President Macron.

Trump capped off his trip to France with a tweet, calling his meeting with Macron a “great honor.”

It was a great honor to represent the United States at the magnificent #BastilleDay parade. Congratulations President @EmmanuelMacron! pic.twitter.com/1J4vZiy98y

Trump is, of course, well known for his handshakes, which have become a topic of much debate during his first six months in the White House due to their awkward intensity and literal power-grab nature.

Trump also performed a prolonged handshake with Macron upon meeting him in Brussels in May. That one included the impressive trifecta of clenched jaws, tight faces, and white knuckles, as one reporter described it.

Speaking with Journal du Dimanche, Macron described his first handshake with Trump as “a moment of truth.”

“My handshake with him, it’s not innocent,” Macron said. “It’s not the alpha and the omega of politics, but a moment of truth.”