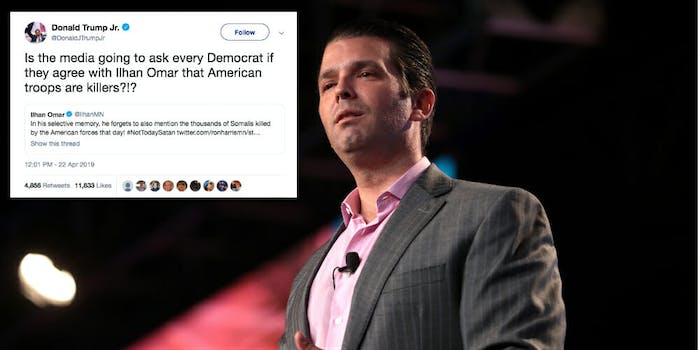 Does Donald Trump Jr. know what American soldiers do?

He responded to Rep. Ilhan Omar's two-year-old tweet and exhibited his confusion.

Donald Trump Jr. responded to a two-year-old tweet from Rep. Ilhan Omar (D-Minn.) on Monday. Based on his comment, it doesn’t seem like Trump Jr. has any idea what U.S. troops do.

“Is the media going to ask every Democrat if they agree with Omar that American troops are killers?!?” Trump Jr. tweeted.

Is the media going to ask every Democrat if they agree with Ilhan Omar that American troops are killers?!? https://t.co/oTknkE0Uf0

His tweet was flooded with comments from people explaining to him the purpose of U.S. troops: “I mean if they aren’t doing killing y’all need to reassess your budget my dude,” one user responded.

It all started in October 2017, when then-senator from Minnesota Al Franken tweeted about the Mogadishu bombings, which was a terrorist attack in Somalia that resulted in the deaths of at least 587 people. To this day, the attack remains the fourth deadliest attack in the world, according to the Free Press Journal.

Someone replied with a comment about the 1993 Battle of Mogadishu, citing that it was the deadliest attack in Somalian history because it wounded and claimed the lives of U.S. armed forces.

Omar wrote back to shine a light on the Somali casualties in the Battle of Mogadishu. It’s estimated that thousands of Somalis died, including an estimated 500 civilians, according to Splinter.

“In his selective memory, he forgets to also mention the thousands of Somalis killed by the American forces that day!” Omar tweeted at the time.

In his selective memory, he forgets to also mention the thousands of Somalis killed by the American forces that day! #NotTodaySatan https://t.co/wrFocrZymQ

This isn’t the first time one of the Trumps took to Twitter to try and attack Omar. On April 13, President Donald Trump tweeted an edited video of 9/11 images intertwined with out-of-context snippets of Omar speaking at the Council on American-Islamic Relations. Trump wrote “WE WILL NEVER FORGET!” on Twitter to accompany the video.

The anti-American rhetoric has been seen by many as inciting violence. Omar previously said she saw an increase in death threats following Trump’s 9/11 tweet.