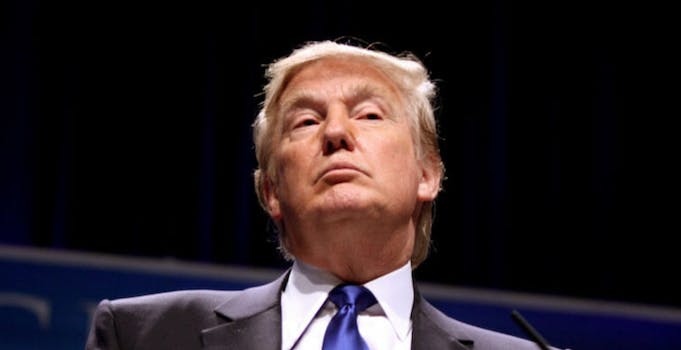 'Stay strong and fight back with vigor.'

President Donald Trump is facing criticism over his support for Fox News host Jeanine Pirro, whose show was taken off the air on Saturday following her comments about Minnesota Rep. Ilhan Omar (D-Minn.)

Pirro’s show, which usually airs on Saturdays, did not air this past weekend. It’s unclear what Pirro’s status with Fox is, or whether or when her show will return.

Fox denounced comments Pirro made on air regarding Rep. Omar last week, according to CNBC. Pirro questioned whether Rep. Omar’s religious beliefs stood in contrast to the Constitution. Omar is Muslim and wears a hijab.

“Think about it: Omar wears a hijab,” Pirro said on Justice With Jeanine Pirro. “Is her adherence to this Islamic doctrine indicative of her adherence to Sharia law, which in itself is antithetical to the United States Constitution.”

The network said in a statement that Pirro’s comments, “do not reflect those of the network and we have addressed the matter with her directly.”

On Sunday morning, New York Times reporter Maggie Haberman pointed out that President Donald Trump had tweeted more often about Pirro than he had about the attack in New Zealand that killed 50. “Ratio of Pirro tweets to NZ mosque massacre tweets?” Haberman wrote.

President of THE UNITED STATES! https://t.co/tSxfc3lcG6

Trump tweeted three times on the day of the attack, saying first “My warmest sympathy and best wishes goes out to the people of New Zealand after the horrible massacre in the Mosques. 49 innocent people have so senselessly died, with so many more seriously injured. The U.S. stands by New Zealand for anything we can do. God bless all!”

My warmest sympathy and best wishes goes out to the people of New Zealand after the horrible massacre in the Mosques. 49 innocent people have so senselessly died, with so many more seriously injured. The U.S. stands by New Zealand for anything we can do. God bless all!

He later reiterated the sentiment and mentioned that he had spoken with New Zealand’s Prime Minister, Jacinda Ardern.

….that we stand in solidarity with New Zealand – and that any assistance the U.S.A. can give, we stand by ready to help. We love you New Zealand!

But the president soon turned his attention to Pirro.

Bring back @JudgeJeanine Pirro. The Radical Left Democrats, working closely with their beloved partner, the Fake News Media, is using every trick in the book to SILENCE a majority of our Country. They have all out campaigns against @FoxNews hosts who are doing too well. Fox …..

….must stay strong and fight back with vigor. Stop working soooo hard on being politically correct, which will only bring you down, and continue to fight for our Country. The losers all want what you have, don’t give it to them. Be strong & prosper, be weak & die! Stay true….

….to the people that got you there. Keep fighting for Tucker, and fight hard for @JudgeJeanine. Your competitors are jealous – they all want what you’ve got – NUMBER ONE. Don’t hand it to them on a silver platter. They can’t beat you, you can only beat yourselves!

He also retweeted posts about his support for Pirro.

The contrast is notable; Fox rebuked Pirro for questioning a Muslim legislator’s loyalty to her country, and the intended victims of the attack in New Zealand were Muslim.