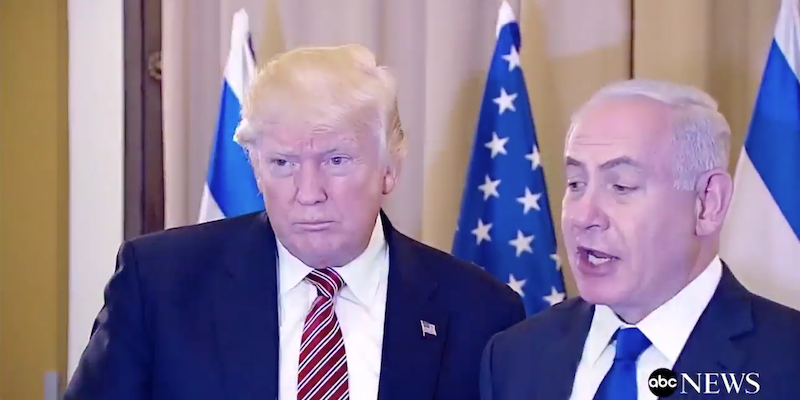 President Trump's face is worth a thousand words.

President Donald Trump on Monday defended his decision to reportedly divulge classified intelligence to Russian officials during his press conference with Israeli Prime Minister Benjamin Netanyahu—and may have confirmed that Israel was the source of the sensitive information.

Instead, Trump reportedly revealed pieces of the classified information to Russian Foreign Minister Sergey Lavrov and Ambassador Sergey Kislyak that could potentially allow the Russian government to identify the source of the intelligence.

Russia is an ally of Iran, a country whose government has repeatedly called for the destruction of Israel.

Trump’s disclosure reportedly put the Israeli spy who was embedded within ISIS at risk. Further, foreign policy and nationals security experts warn that Trump’s move may result in American allies restricting the intelligence they share with the United States.

The president is currently on a nine-day trip abroad, his first as president. Over the weekend, Trump visited Saudi Arabia, and he is currently visiting Israel. He will meet with Palestinian President Mahmoud Abbas on Tuesday before traveling to Vatican City, Brussels, and Sicily over the next week.