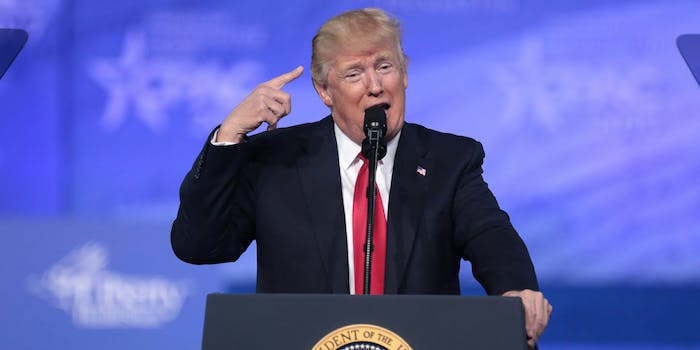 Trump has an IQ obsession.

President Donald Trump challenging Secretary of State Rex Tillerson to an IQ test in response to reports that he called the president a “moron” shouldn’t be that shocking–Trump has cited his self-proclaimed high intelligence quotient several times in the past.

During a wide-ranging interview with Forbes, Trump suggested that Tillerson and he should compare their scores.

“I think it’s fake news, but if he did that, I guess we’ll have to compare IQ tests. And I can tell you who is going to win,” Trump said.

Here are a few times Trump has challenged people to an IQ face-off, or just insulted their intelligence.

"@ThisNBAgirl: @realDonaldTrump You are not as smart as Mark Cuban, no matter what you think. Keep to what you know. Lets do an I.Q. test!

.@GovernorPerry failed on the border. He should be forced to take an IQ test before being allowed to enter the GOP debate.

.@hardball_chris must have the lowest IQ on television—now telling people that domestic terrorists are from the right.

"@gharo34: @realDonaldTrump Not only is your IQ somewhere between Barack Obama and G.W.Bush…but you're entertaining!"Much higher than both

"@NJWineGeek: @realDonaldTrump but Jon Stewart has a much higher IQ. Wrong, Jon Stewart(?) is an obnoxious lightweight with a lower I.Q.

"@A11_Seeing_Eye: @realDonaldTrump @DAM615 Does an IQ of 60 count as being smart?" No, sadly you are very dumb-but probably born that way.

Sorry losers and haters, but my I.Q. is one of the highest -and you all know it! Please don't feel so stupid or insecure,it's not your fault

"@ardow: @realDonaldTrump Jebs got no IQ … same as his brother."

Trump challenged the mayor to an IQ test after Piers Morgan told Trump that Khan had been critical of Trump.

And, of course, Rex Tillerson.