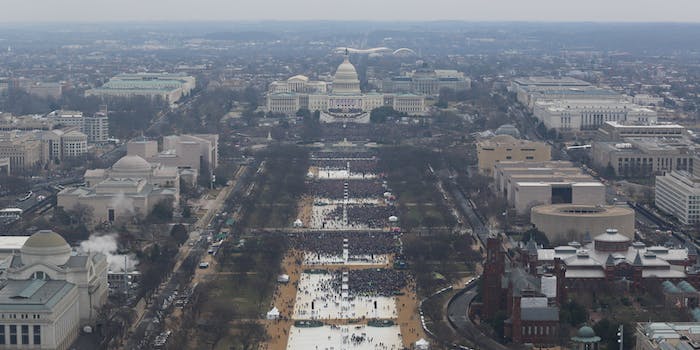 No doubt about it.

President Trump‘s White House claimed that 1.5 million Americans watched the president’s swearing-in ceremony live in D.C. on Jan. 20. The media was accused of manipulating photographs to discredit his support and weigh it against Obama‘s crowds from ’09 and ’13. But the National Park Service (NPS) on Monday settled the uncertainty—and there’s no debating who wore it bigger.

That’d be Obama, apparently both times out. Thanks to a Freedom of Information Act request (FOIA) by numerous media outlets, the photos show clear disparities between the turnout.

Comparison to Obama in 2009 pic.twitter.com/dCLfT2ohJ4

Well, a little old, but I finally got the Inauguration photos I asked for using a FOIA to the @NatlParkService. Compare 2009, 2013 and 2017. pic.twitter.com/CuQZTDoacP

NPS released dozens of photos from numerous angles. Trump’s statements bragging about his crowd size appear to be inflated, but even if his 1.5 million figure was accurate, it does not match the 1.8 million Americans who stood with Obama in 2009.

White House Press Secretary Sean Spicer maintained that Trump’s inauguration crowd was the “largest… to witness an inauguration, period.” As BuzzFeed notes, Spicer then “challenged the media to prove him wrong.”

As of this writing, Trump’s team has yet to respond to the photos.