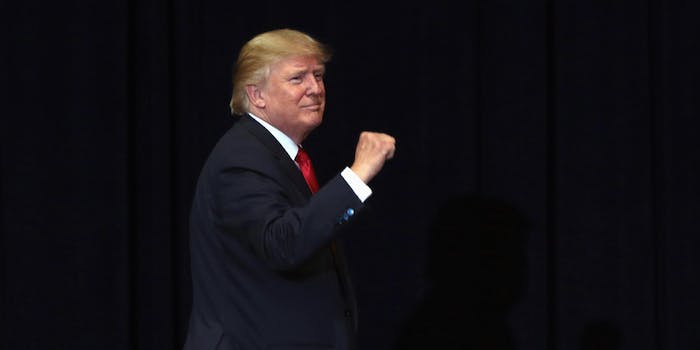 An ethics watchdog says he crossed a line.

President Donald Trump reportedly used a planned visit to Texas related to Hurricane Harvey relief efforts to simultaneously hold a fundraiser and write off the trip as a taxpayer expense, according to reports.

Schedulers for Trump added the briefing on Harvey relief efforts to Trump’s visit to Dallas, Texas, on Wednesday—where he was hosting a gallant fundraiser, according to Newsweek.

Trump met with state and federal officials at Dallas Love Field Airport, after which he was scheduled to attend a private fundraiser that was rescheduled after Harvey hit the Gulf Coast in Texas, leaving massive devastation in its wake.

The fundraiser cost $2,700 per person and photos with the president cost $35,000, according to WFAA.

Operating Air Force One costs $200,000 per hour of operation, according to Fortune.

The government watchdog group Citizens for Responsibility and Ethics in Washington (CREW) told Newsweek that the double whammy of a fundraiser and official government business was yet another instance of the president skirting ethical lines.

“It appears to be unprecedented to the extent that Trump is taking part in political travel this early on as it relates to his 2020 campaign,” Virginia Canter, the executive branch ethics counsel for CREW, told Newsweek.

As the news outlet points out, it isn’t clear whether the Federal Election Commission (FEC) would require the trip be reimbursed, as the trip is for both political and nonpolitical purposes. FEC rules state that presidents must reimburse the government for travel that is for “campaign purposes.”

You can read Newsweek’s story on the trip here.