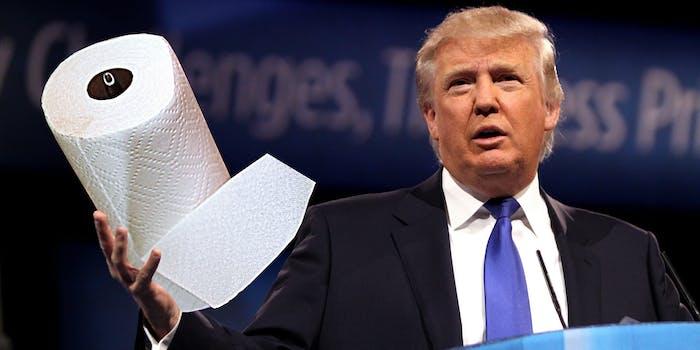 President Trump's trip to Puerto Rico results in yet another bizarre scene.

Nothing quite says disaster relief like flying paper towels, right?

During an event where he met with victims of the storm, Trump tossed rolls of paper towels into a crowd of survivors from behind a table of supplies. Videos of the interaction show Trump flinging the paper towels past the people in the front of the crowd as others take photos with their phones.

It wasn’t the only less-than-ideal moment from Trump’s trip to the United States territory. Earlier on Tuesday, Trump told officials in Puerto Rico that they can be “very proud” of the death toll since it was not as high as the death toll from a “real catastrophe like Katrina.” Puerto Rico residents are American citizens.

Trump also jokingly said the damage in Puerto Rico has “thrown our budget out of whack.”

Sixteen people have died as a result of the damage done by Hurricane Maria, according to the official tally.