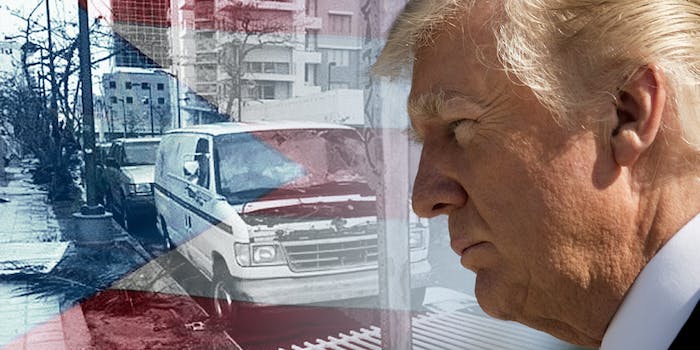 He did tweet about sports over a dozen times this weekend, though.

It has been five days since Hurricane Maria destroyed Puerto Rico. Thirteen people have died. All of the island nation is without power and may remain so for up to six months. Around 70,000 people living in the Guajatacata River’s floodplain have been forced to evacuate their homes. According to Puerto Rico’s Resident Commissioner Jenniffer Gonzalez, the destruction will set the country back “nearly 20 to 30 years.”

So, where is President Donald Trump?

Puerto Rico is a U.S. territory, meaning its 3.4 million people are citizens of the United States. While the Pentagon said it has dispatched members of Army Corps engineers—4,000 Army Reserve members have been also deployed to the country, along with 1,600 Nation Guard members, according to FEMA—Trump hasn’t said much about Puerto Rico since the hurricane first hit on Wednesday. He instead spent his weekend tweeting over a dozen times about sports figures and kneeling for the flag, interspersed with threats to North Korea and insults to senators who don’t want to repeal Obamacare.

If NFL fans refuse to go to games until players stop disrespecting our Flag & Country, you will see change take place fast. Fire or suspend!

…NFL attendance and ratings are WAY DOWN. Boring games yes, but many stay away because they love our country. League should back U.S.

Many are calling out Trump—who expressed concern for the victims of recent hurricanes in Texas and Florida but who, in general, has not shown much respect for people of color—for his silence. One detractor, in particular, was Hillary Clinton.

President Trump, Sec. Mattis, and DOD should send the Navy, including the USNS Comfort, to Puerto Rico now. These are American citizens. https://t.co/J2FVg4II0n

Instead of arguing with football players, let’s put politics aside and help #PuertoRico. https://t.co/eA5CGb00bI

No matter what crazy stuff Trump is up to now let's keep in mind Puerto Rico really needs our attention and help. pic.twitter.com/SAPwMvx2KE

And then there were the reporters and citizens waiting for a response—but who also weren’t too surprised that hadn’t been one over the weekend.

Trump tweets this weekend about NFL/NBA/NHL: 10

Yesterday, Trump tweeted 10 TIMES about the NFL.
NO times about Puerto Rico.
3.5M AMERICANS have no power.
Some are still on their roofs. https://t.co/vePdxt3nHb

What do millions of people facing disaster in Puerto Rico need to do to get Pres. Trump's attention: take a knee?

Trump's racist neglect of Puerto Rico is threatening lives. It is time to start caring about the crisis there.

A White House official told CNN on Friday that Trump “is committed to going, but date is still unclear,” adding, “as you note, there are significant infrastructure concerns.”

As of Monday morning, Trump was still parsing the worth of sports figures and fans on Twitter.